A Chair on the Boulevard 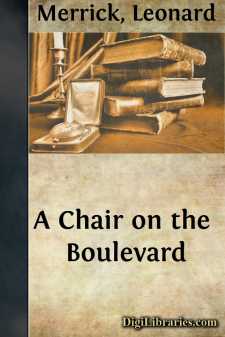 These disjointed thoughts about one of Leonard Merrick's most articulate books must begin with a personal confession.

For many years I walked about this earth avoiding the works of Leonard Merrick, as other men might have avoided an onion. This insane aversion was created in my mind chiefly by admirers of what is called the "cheerful" note in fiction. Such people are completely agreed in pronouncing Mr. Merrick to be a pessimistic writer. I hate pessimistic writers.

Years ago, when I was of an age when the mind responds acutely to exterior impressions, some well-meaning uncle, or other fool, gave me a pessimistic book to read. This was a work of fiction which the British Public had hailed as a masterpiece of humour. It represented, with an utter fury of pessimism, the spiritual inadequacies of—but why go into details.

Now, I have to confess that for a long time I did Mr. Merrick the extraordinary injustice of believing him to be the author of that popular masterpiece.

The mistake, though intellectually unpardonable, may perhaps be condoned on other grounds. By virtue of that process of thought which we call the "association of ideas," I naturally connected Mr. Merrick with this work of super-pessimism; my friends being so confirmed in their belief that he was a super-pessimist.

But by virtue of a fortunate accident, I at last got the truth aboutMr. Merrick. This event arose from the action of a right-mindedbutcher, who, having exhausted his stock of The Pigeon-Fancier'sGazette, sent me my weekly supply of dog-bones wrapped about withLeonard Merrick.

These dog-bones happened to reach my house at a moment when no other kind of literary nutriment was to be had. Having nothing better to read I read the dog-bone wrappers. Thus, by dog-bones, was I brought to Merrick: the most jolly, amusing, and optimistic of all spiritual friends.

The book to which these utterances are prefixed is to my mind one ofthe few really amusing books which have been published inEngland during my lifetime. But, then, I think that all of Mr.Merrick's books are amusing: even his "earnest" books, such as TheActor-Manager, When Love Flies out o' the Window, or ThePosition of Peggy Harper.

It is, of course, true that such novels as these are unlikely to be found congenial by those persons who derive entertainment from fiction like my uncle's present. On the other hand, there are people in the world with a capacity for being amused by psychological inquiry. To such people I would say: "Don't miss Merrick." The extraordinary cheerfulness of Mr. Merrick's philosophy is a fact which will impress itself upon all folk who are able to take a really cheerful view of life.

All of Mr. Merrick's sermons—I do not hesitate to call his novels "sermons," because no decent novel can be anything else—all his sermons, I say, point to this conclusion: that people who go out deliberately to look for happiness, to kick for it, and fight for it, or who try to buy it with money, will miss happiness; this being a state of heart—a mere outgrowth, more often to be found by a careless and self-forgetful vagrant than by the deliberate and self-conscious seeker....