A Century of English Essays An Anthology Ranging from Caxton to R. L. Stevenson & the Writers of Our Own Time 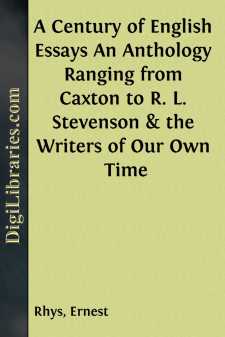 This is a book of short essays which have been chosen with the full liberty the form allows, but with the special idea of illustrating life, manners and customs, and at intervals filling in the English country background. The longer essays, especially those devoted to criticism and to literature, are put aside for another volume, as their different mode seems to require. But the development of the art in all its congenial variety has been kept in mind from the beginning; and any page in which the egoist has revealed a mood, or the gossip struck on a vein of real experience, or the wise vagabond sketched a bit of road or countryside, has been thought good enough, so long as it helped to complete the round. And any writer has been admitted who could add some more vivid touch or idiom to that personal half meditative, half colloquial style which gives this kind of writing its charm.

We have generally been content to date the beginning of the Essay in English from Florio's translation of Montaigne. That work appeared towards the end of Queen Elizabeth's time, in 1603, and no doubt it had the effect of setting up the form as a recognized genre in prose. But as we go back behind Florio and Montaigne, and behind Francis Bacon who has been called our "first essayist," we come upon various experiments as we might call them—essays towards the essay, attempts to work that vein, discursively pertinent and richly reminiscent, out of which the essay was developed. Accordingly for a beginning the line has been carried back to the earliest point where any English prose occurs that is marked with the gossip's seal. A leaf or two of Chaucer's prose, a garrulous piece of the craftsman's delight in his work from Caxton, and one or two other detachable fragments of the same kind, may help us to realize that there was a predisposition to the essay, long before there was any conscious and repeated use of the form itself. By continuing the record in this way we have the advantage of being able to watch its relation to the whole growth in the freer art of English prose. That is a connection indeed in which all of us are interested, because however little we write, whether for our friends only, or for the newspapers, we have to attempt sooner or later something which is virtually an essay in everyday English. There is no form of writing in which the fluid idiom of the language can be seen to better effect in its changes and in its movement. There is none in which the play of individuality, and the personal way of looking at things, and the grace and whimsicality of man or woman, can be so well fitted with an agreeable and responsive instrument. When Sir Thomas Elyot in his "Castle of Health" deprecates "cruel and yrous[1] schoolmasters by whom the wits of children be dulled," and when Caxton tells us "that age creepeth on me daily and feebleth all the body," and that is why he has hastened to ordain in print the Recule of the Historeys of Troyes, and when Roger Ascham describes the blowing of the wind and how it took the loose snow with it and made it so slide upon the hard and crusted snow in the field that he could see the whole nature of the wind in that act, we are gradually made aware of a particular fashion, a talking mode (shall we say?) of writing, as natural, almost as easy as speech itself; one that was bound to settle itself at length, and take on a propitious fashion of its own....