A Castle in Spain A Novel 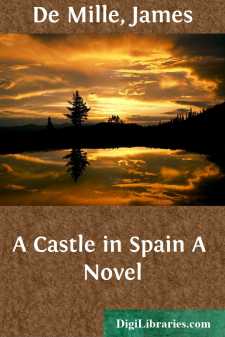 CHAPTER I. HOW A PARTY OF TRAVELLERS SET OUT ON A JOURNEY.

The train for the North was about to start from Madrid, and the station was filled with the usual varied and bustling crowd. Throngs of soldiers were there; throngs of priests; throngs of civilians; throngs of peasants; all moving to and fro, intermingled with the railway employés, and showing the power of steam to stir up even the lazy Spaniard to unwonted punctuality and portentous activity. In the midst of this busy scene two men stood apart, each by himself, with eyes fixed upon the entrance, as though expecting some one whose advent was of no ordinary importance. One of these was an unmistakable Spaniard, of medium size, dark complexion, penetrating black eyes, and sombre countenance. His dress was that of a civilian, but his bearing was military, and his face and general expression savored of the camp. The other was an Englishman, with all his country beaming in his face, tall in stature, light in complexion, with gray eyes, and open, frank expression. He had a thin mustache, flaxen side whiskers, and no beard. He stood in an easy, nonchalant attitude, with an eye-glass stuck in one eye, and a light cane in his hand, which he switched carelessly upon his leg.

At length the two were roused by the approach of a party of people who were undoubtedly the very ones for whom they had been thus waiting.

This party consisted of three persons. First, there was an elderly man, florid, stoutish, and fussy—the Paterfamilias of Punch, with a dash of the heavy father of comedy. He was evidently in a terrible strait, and halting between two opinions, namely, whether he should stay and watch over his family, or go away and see after his luggage.

Then there was a lady of certain or uncertain age—a faded, washed-out blonde, who surveyed the scene with a mixture of trepidation and caution.

Neither of these, however, could have had any interest in the eyes of the two watchers; and it must have been the third member of this party who had led them to lie in wait.

In truth, this third one seemed well worthy of such attention. She was a young lady, of slight and elegant figure; with a sweet and lovely face, round, arch, full of liveliness, merriment, and volatility, which were expressed in every glance of her sparkling eyes. And while the man fidgeted and the woman fussed, this young person stood with admirable self-possession, looking round inquiringly, as though she too might be expecting some one.

Paterfamilias hesitated a little longer, and then made up his mind, for, telling the ladies to wait, he hurried away after his luggage. No sooner had he gone than the two young men, who had held back till then, hurried to the spot. The Englishman reached it first. The elder lady, on seeing him, stared for an instant, and then abruptly turned her back, thus giving him the cut direct in the most pointed and insulting manner. In thus turning she found herself face to face with the Spaniard, who made a very ceremonious bow, saying,

"It gif me mooch pleasure, Madame Russell, to pay my respetts, an' to weesh the good-day."

At this the lady hesitated, as though intending to give this man also the cut, but finally she chose to be gracious; so extending her hand, she said,