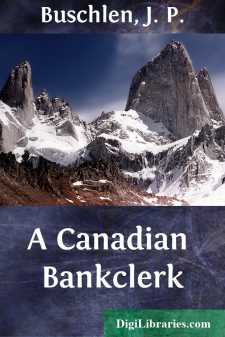 CHAPTER I. OUR BANKER.

The Ontario village of Hometon rested. It had been doing for so many years. There, in days gone by, pioneers with bushy beards—now long out-of-date, but threatening to sprout again—had fearlessly faced the wolf-haunted forests, relying, no doubt, upon the ferocity of their own appearance to frighten off the devourer.

A few old elm trees still remained in the village, to protect it from the summer sun; and still lived also an occasional pioneer, gnarled and rugged like the old elms, to sigh and shake his head at the new civilization, and shelter whom he might from the power of its stroke.

One of these ancient fathers meandered across the main street and into a grocery store. He plucked a semi-petrified prune from its sticky environment and drew a stool up to the counter.

The old gentleman worried the stolen morsel into one cheek and replied:

While the grocer stood wondering whether the "keep a-goin'" referred to himself or "our boys," a customer entered.

"How d'you do, Mrs. Arling," he smiled, leaving the old man to his quid-like mouthful.

But, in the case of a lady shopper, where business interferes with the telling of a story—or anything—postpone business.

"Ah yes, Grandpa Newman," she sighed, "the town will soon be deserted."

The grey-haired man looked at her as much as to ask: "Pray, how did you manage to overhear what I was saying?" What he did ask was:

"How does his mother feel, Mrs. Arling?"

"I'm just on my way there now," replied the lady-shopper; "give me a can of pork-and-beans, will you, John?"

The grocer, whom almost everyone in town called by his first name, climbed nimbly up the side of his store and fished out the desired article. Meanwhile Mrs. Arling winked at the old man and whispered:

"He looks like a boy, Grandpa, the way he scales that shelf; but he's past forty!"

Grandpa Newman smiled when "Mary" had gone, then shook his head and sighed. The grocer proceeded to wheedle more news out of the village information bureau.

"Young Nelson; he's goin' away out here to Mt. Alban to j'in one of them banks."

"Yes," drawled the grandsire, "it beats the Old Scratch how these youngsters have got new-fangled idears into their heads. Now, when I was a boy—"

But the observation Mrs. Arling was, a few minutes later, making to Mrs. Nelson, is more to the point:

"My dear Caroline, I just dropped in to tell you how sorry and how glad I am."

"It is lonesome, Mary; but you know we can't keep them home forever."

"No, indeed," agreed Mrs. Arling, "that's what I tell my silly old man when he gets to worrying about our boy, who's only twelve. Let them go—they'll be glad to come back."

"It's all very well for you to sit there and act brave," laughed Mrs....