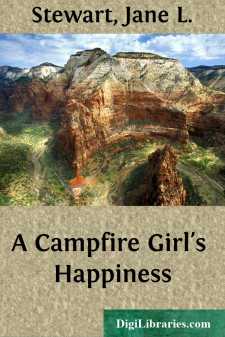 The sun rose over Plum Beach to shine down on a scene of confusion and wreckage that might have caused girls less determined and courageous than those who belonged to the Manasquan Camp Fire of the Camp Fire Girls of America to feel that there was only one thing to do–pack up and move away. But, though the camp itself was in ruins, there were no signs of discouragement among the girls themselves. Merry laughter vied with the sound of the waves, and the confusion among the girls was more apparent than real.

“Have you got everything sorted, Margery–the things that are completely ruined and those that are worth saving?” asked Eleanor Mercer, the Guardian of the Camp Fire.

“Yes, and there’s more here that we can save and still use than anyone would have dreamed just after we got the fire put out,” replied Margery Burton, one of the older girls, who was a Fire-Maker. In the Camp Fire there are three ranks–the Wood-Gatherers, to which all girls belong when they join; the Fire-Makers, next in order, and, finally, the Torch-Bearers, of which Manasquan Camp Fire had none. These rank next to the Guardian in a Camp Fire, and, as a rule, there is only one in each Camp Fire. She is a sort of assistant to the Guardian, and, as the name of the rank implies, she is supposed to hand on the light of what the Camp Fire has given her, by becoming a Guardian of a new Camp Fire as soon as she is qualified.

“What’s next?” cried Bessie King, who had been working with some of the other girls in sorting out the things which could be used, despite the damage done by the fire that had almost wiped out the camp during the night.

“Why, we’ll start a fire of our own!” said Eleanor. “There’s no sort of use in keeping any of this rubbish, and the best way to get rid of it is just to burn it. All hands to work now, piling it up and seeing that there is a good draught underneath, so that it will burn up. We can get rid of ashes easily, but half-burned things are a nuisance.”

“Where are we going to sleep to-night?” asked Dolly Ransom, ruefully surveying the places where the tents had stood. Only two remained, which were used for sleeping quarters by some of the girls.

“I’m more bothered about what we’re going to eat,” said Eleanor, with a laugh. “Do you realize that we’ve been so excited that we haven’t had any breakfast? I should think you’d be starved, Dolly. You’ve had a busier morning than the rest of us, even.”

“I am hungry, when I’m reminded of it,” said Dolly, with, a comical gesture. “What ever are we going to do, Miss Eleanor?”

“I’m just teasing you, Dolly,” said Eleanor. “Mr. Salters came over from Green Cove in his boat, when he saw the fire, to see if he couldn’t help in some way, and he’s gone in to Bay City. He’ll be out pretty soon with a load of provisions, and as many other things as he can stuff into the Sally S.”

“We certainly are!” said Eleanor, her eyes flashing. “I don’t see why we should let a little thing like this fire drive us away! We are going to stay here, and, what’s more, we’re going to have just as good a time as we planned to have when we came here–if not a better one!”

“Good!” cried half a dozen of the girls together.

Soon all the rubbish was collected, and a fire had been built. And, while Margery Burton applied a light to it, the girls formed a circle about it, and danced around, singing the while the most popular of Camp Fire songs, Wo-he-lo....