A Calendar of Scottish Saints 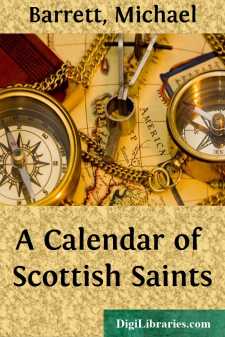 The title of Scottish, applied to the holy ones whose names occur in these short notices, must be understood to refer not so much to their nationality as to the field in which, they laboured or the localities where traces of their cultus are to be found. The Calendar here submitted does not pretend to be exhaustive; the saints therein noted are those who appear prominently in such records as remain to us and in the place-names which still recall their personalities.

In this new edition much additional information has been inserted, and many emendations made to render the Calendar as complete as possible.

The chief sources relied upon in the compilation of the work are:

The Breviary of Aberdeen, drawn up by Bishop Wm. Elphinstone, and printed in 1509.

The date at the head of each notice is generally that of the death of the saint concerned.

The Saint whose feast is celebrated on this day was a disciple of the great St. Columba, and is said by Colgan, the renowned Irish scholar, to have been his nephew. What connection the saint had with Scotland is not clear. He may have laboured for a time there under St. Columba, but he became Abbot of Drumhome in Donegal. On the night St. Columba went to his reward, as we are told by that saint's biographer, St. Adamnan, Ernan was favoured with a vision in which the saint's death was revealed to him. St. Ernan died in his Irish monastery at an advanced age in the year 640. The church of Killernan, in Ross-shire, is named after him. Another dedication to this saint is thought by some to be Kilviceuen in Mull.

On account of the destruction of so many ecclesiastical records at the Reformation, many {2} particulars regarding some of our Scottish saints have been irrevocably lost. This is the case with the holy man before us. All that we know of him may be told in a few words. He lived in the Cunningham district of Ayrshire, where he was revered during life and venerated after death for his great sanctity. On his deathbed we are told he kept continually repeating those words of the 83rd Psalm, "My soul longeth and fainteth for the courts of the Lord. My heart and my flesh have rejoiced in the Living God."

Like so many holy souls whose lives drew down the grace of Heaven upon the land, St. Kentigerna was of Irish race. Her brother, St. Comgan, succeeded their father, a prince of Leinster, in the government of his territory. Meeting with violent opposition from the neighbouring princes, on account of his just and upright Christian rule, St. Comgan was obliged to fly the country, and together with his widowed sister, who had been married to an Irish prince, took refuge in Scotland. St....