A Busy Year at the Old Squire's 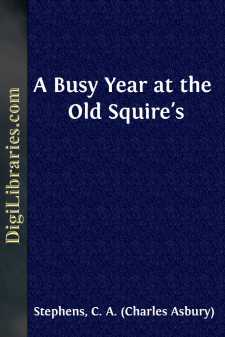 Master Joel Pierson arrived the following Sunday afternoon, as he had promised in his letter of Thanksgiving Day eve, and took up his abode with us at the old Squire's for the winter term of school.

Cousin Addison drove to the village with horse and pung to fetch him; and the pung, I remember, was filled with the master's belongings, including his school melodeon, books and seven large wall maps for teaching geography. For Master Pierson brought a complete outfit, even to the stack of school song-books which later were piled on the top of the melodeon that stood in front of the teacher's desk at the schoolhouse. Every space between the windows was covered by those wall maps. No other teacher had ever made the old schoolhouse so attractive. No other teacher had ever entered on the task of giving us instruction with such zeal and such enthusiasm. It was a zeal, too, and an enthusiasm which embraced every pupil in the room and stopped at nothing short of enlisting that pupil's best efforts to learn.

Master Pierson put life and hard work into everything that went on at school—even into the old schoolhouse itself. Every morning he would be off from the old Squire's at eight o'clock, to see that the schoolhouse was well warmed and ready to begin lessons at nine; and if there had been any neglect in sweeping or dusting, he would do it himself, and have every desk and bench clean and tidy before school time.

What was more, Master Pierson possessed the rare faculty of communicating his own zeal for learning to his pupils. We became so interested, as weeks passed, that of our own accord we brought our school books home with us at night, in order to study evenings; and we asked for longer lessons that we might progress faster.

My cousin Halstead was one of those boys (and their name is Legion) who dislike study and complain of their lessons that they are too long and too hard. But strange to say, Master Joel Pierson somehow led Halse to really like geography that winter. Those large wall maps in color were of great assistance to us all. In class we took turns going to them with a long pointer, to recite the lesson of the day. I remember just how the different countries looked and how they were bounded—though many of these boundaries are now, of course, considerably changed.

When lessons dragged and dullness settled on the room, Master Joel was wont to cry, "Halt!" then sit down at the melodeon and play some school song as lively as the instrument admitted of, and set us all singing for five or ten minutes, chanting the multiplication tables, the names of the states, the largest cities of the country, or even the Books of the Bible. At other times he would throw open the windows and set us shouting Patrick Henry's speech, or Byron's Apostrophe to the Ocean. In short, "old Joel" was what now would be called a "live wire." He was twenty-two then and a student working his own way through Bates College. After graduating he migrated to a far western state where he taught for a year or two, became supervisor of schools, then State Superintendent, and afterwards a Representative to Congress....