A Bundle of Ballads 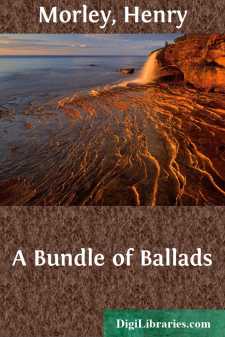 Add to My Favorites
Published: 10 years ago
Downloads: 96
Rating: (0 Votes)

INTRODUCTION BY THE EDITOR.

Recitation with dramatic energy by men whose business it was to travel from one great house to another and delight the people by the way, was usual among us from the first. The scop invented and the glee-man recited heroic legends and other tales to our Anglo-Saxon forefathers. These were followed by the minstrels and other tellers of tales written for the people. They frequented fairs and merrymakings, spreading the knowledge not only of tales in prose or ballad form, but of appeals also to public sympathy from social reformers.

As late as the year 1822, Allan Cunningham, in publishing a collection of "Traditional Tales of the English and Scottish Peasantry," spoke from his own recollection of itinerant story-tellers who were welcomed in the houses of the peasantry and earned a living by their craft.

The earliest story-telling was in recitative. When the old alliteration passed on into rhyme, and the crowd or rustic fiddle took the place of the old "gleebeam" for accentuation of the measure and the meaning of the song, we come to the ballad-singer as Philip Sidney knew him. Sidney said, in his "Defence of Poesy," that he never heard the old song of Percy and Douglas, that he found not his heart moved more than with a trumpet; and yet, he said, "it is sung but by some blind crowder, with no rougher voice than rude style; which being so evil apparelled in the dust and cobweb of that uncivil age, what would it work trimmed in the gorgeous eloquence of Pindar?" Many an old ballad, instinct with natural feeling, has been more or less corrupted, by bad ear or memory, among the people upon whose lips it has lived. It is to be considered, however, that the old broader pronunciation of some letters developed some syllables and the swiftness of speech slurred over others, which will account for many an apparent halt in the music of what was actually, on the lips of the ballad-singer, a good metrical line.

"Chevy Chase" is, most likely, a corruption of the French word chevauchee, which meant a dash over the border for destruction and plunder within the English pale. Chevauchee was the French equivalent to the Scottish border raid. Close relations between France and Scotland arose out of their common interest in checking movements towards their conquest by the kings of England, and many French words were used with a homely turn in Scottish common speech. Even that national source of joy, "great chieftain of the pudding-race," the haggis, has its name from the French hachis. At the end of the old ballad of "Chevy Chase," which reads the corrupted word into a new sense, as the Hunting on the Cheviot Hills, there is an identifying of the Hunting of the Cheviot with the Battle of Otterburn:—

"Old men that knowen the ground well enough call it the Battle ofOtterburn.At Otterburn began this spurn upon a Monenday;There was the doughty Douglas slain, the Percy never went away."

The Battle of Otterburn was fought on the 19th of August 1388. The Scots were to muster at Jedburgh for a raid into England....