A Budget of Paradoxes, Volume I 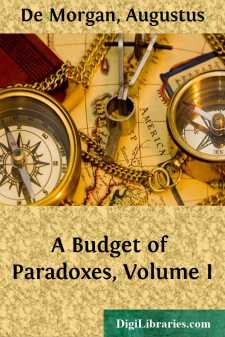 PREFACE TO THE FIRST EDITION.

It is not without hesitation that I have taken upon myself the editorship of a work left avowedly imperfect by the author, and, from its miscellaneous and discursive character, difficult of completion with due regard to editorial limitations by a less able hand.

Had the author lived to carry out his purpose he would have looked through his Budget again, amplifying and probably rearranging some of its contents. He had collected materials for further illustration of Paradox of the kind treated of in this book; and he meant to write a second part, in which the contradictions and inconsistencies of orthodox learning would have been subjected to the same scrutiny and castigation as heterodox ignorance had already received.

It will be seen that the present volume contains more than the Athenæum Budget. Some of the additions formed a Supplement to the original articles. These supplementary paragraphs were, by the author, placed after those to which they respectively referred, being distinguished from the rest of the text by brackets. I have omitted these brackets as useless, except where they were needed to indicate subsequent writing.

Another and a larger portion of the work consists of discussion of matters of contemporary interest, for the Budget was in some degree a receptacle for the author's thoughts on any literary, scientific, or social question. Having grown thus gradually to its present size, the book as it was left was not quite in a fit condition for publication, but the alterations which have been made are slight and few, being in most cases verbal, and such as the sense absolutely required, or transpositions of sentences to secure coherence with the rest, in places where the author, in his more recent insertion of them, had overlooked the connection in which they stood. In no case has the meaning been in any degree modified or interfered with.

One rather large omission must be mentioned here. It is an account of the quarrel between Sir James South and Mr. Troughton on the mounting, etc. of the equatorial telescope at Campden Hill. At some future time when the affair has passed entirely out of the memory of living Astronomers, the appreciative sketch, which is omitted in this edition of the Budget, will be an interesting piece of history and study of character.

A very small portion of Mr. James Smith's circle-squaring has been left out, with a still smaller portion of Mr. De Morgan's answers to that Cyclometrical Paradoxer.

In more than one place repetitions, which would have disappeared under the author's revision, have been allowed to remain, because they could not have been taken away without leaving a hiatus, not easy to fill up without damage to the author's meaning.

I give these explanations in obedience to the rules laid down for the guidance of editors at page . If any apology for the fragmentary character of the book be thought necessary, it may be found in the author's own words at page 281 of the second volume.

The publication of the Budget could not have been delayed without lessening the interest attaching to the writer's thoughts upon questions of our own day....