A Briefe Introduction to Geography 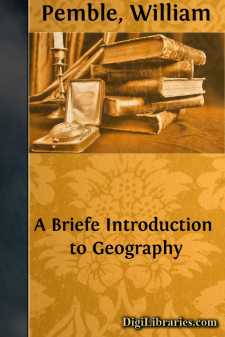 CHAP. 1. A generall description and division of Geography.

Topographie is a particular description of some small quantity of Land, such as Land measurers sett out in their plots.

Chorographie is a particular description of some Country, as of England, France, or any shire or prouince in them: as in the vsuall and ordinary mappe.

Geography is an art or science teaching vs the generall description of the whole earth, of this especially wee are now to speake of, and also Chorography as a part vnder it conteyned: both, excellent parts of knowledge in them selues, and affoording much profit and helpe in the vnderstanding of history & other things. The parts of Geography are two.

Generall, which treateth of the nature, qualities, measure, with other generall properties of the earth.Speciall, wherein the seuerall countrys and coasts of the earth are deuided and described.

Of the generall in the first place, and more at large then of the other, because it is more difficult, and hard to bee vnderstood, and yet of necessary vse, for the vnderstanding of the other. This generall tract may bee parted into fiue particular heads.

These in theire order.

CAP. 2. Of certaine generall properties of the earth.

In Geography when wee name the earth wee meane not the earth taken seuerally by itselfe, without the seas and waters. But vnder one name both are comprised, as they are now mingled one with another and doe both together make vp one entire and round body. Neither doe wee diue into the bowels of the earth, and enter into consideration of the naturall qualities, which are in the substance of Earth and water, as coldnes, drinesse moisture, heauines, and the like, but wee looke only vpon the out side, contemplating the greatnesse, scituation, distances, measuringe, and other such affections which appeare in the superficies of it, to the eyes of our bodies and mindes: These then of the earth and water together, rules are to bee knowne,

The earth and the water doe make one globe, i.e., one round or sphericall body.

The naturall place of the water is to bee aboue the earth, and soe it was in the first creation of it, compassing, the earth round aboute as appeares Genes. 1. 9. But for the vse of man and all other liuing creatures, God made a separation of them caussing the waters to sinke downe into huge hollow channells, prepared to receaue it, that so the drie land might appeare aboue it. Notwithstanding which separation, they doe both still remaine together, not couering one another as at first, but intermingled one with another, and that soe exactly as they now make but one round body, whereas at first they made two. Here therfore are two poynts to be proued, 1. That they are one globe. 2. that this one is round.

They are one globe hauing the same Center or middle pointe, and the same surface or conuexe superficies, which will appeare by these reasons....