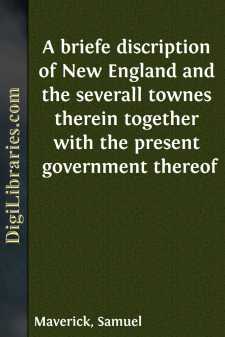 The Committee on English Research of the New England Historic Genealogical Society called attention in their last annual report to the fact that there were in England many important documents relating to the American colonies, as well as manuscript maps hitherto unknown to historical investigators. They urged upon the society the desirability of having exact copies of them made now while we have in Mr. Henry Fitz-Gilbert Waters an experienced American antiquary resident in London. This statement has been most strikingly verified by the recent discovery by Mr. Waters of the Winthrop map—one of the most valuable contributions yet made to our early colonial history—notices of which appeared in the Proceedings of the Massachusetts Historical Society for June, 1884, and in the Register for July, 1884 (xxxviii. 342).

The manuscript "Description of New England," which is here printed, is a still more important discovery. Though it bears neither name nor date, there is internal evidence that it was written in the year 1660, after the return of Charles II., by Samuel Maverick, afterwards one of the king's commissioners. Maverick, when Winthrop and his company arrived, was settled at Noddle's Island, now East Boston, and was known to have been here some years before. The date of his arrival in New England has hitherto been unknown. This manuscript gives it as 1624. Maverick was then about twenty-two years old.

An account of New England by one of the first white men who ever settled on the shores of Massachusetts Bay, one of the "old planters" whom Gov. Winthrop found here, is certainly of extraordinary interest to all students of our colonial history. Its fortunate discovery emphasizes in the strongest manner the great importance of the work which Mr. Waters is doing for us in England.

This paper clears up many obscurities in our early New England history, and gives us definite information which we have long desired to obtain. It was probably presented to Sir Edward Hyde, afterwards Earl of Clarendon, who was then Charles the Second's Lord High Chancellor. It may be the paper referred to by Maverick in his letter to the earl, printed in the Collections of the New York Historical Society for 1869, page 19. That letter and others in the same volume should be read in connection with the present paper. They show the persistency displayed by Maverick in his efforts to deprive New England, and particularly Massachusetts, of the right of self-government which had so long been enjoyed here. The same spirit is shown in his letters printed in the third volume of the New York Colonial Documents. The death of Maverick, which occurred between October 15, 1669, and May 15, 1676, did not bring repose to the people of Massachusetts. In the latter year a new assailant of their charter appeared in the person of Edward Randolph (see Register, xxxvi. 155), whose assaults on their liberties did not cease till the charter was wrested from them, and the government under it came to an end May 20, 1686.

The document here printed is in the British Museum, Egerton MSS. 2395, ff. 397-411. The volume containing it was in private hands till 1875, when on the sixteenth of February in that year it was sold at auction by Messrs. Sotheby & Co., London, and bought by the Trustees of the British Museum.

The long residence of Mr. Maverick, the writer of this "Description of New England," on these shores, and the opportunities which he is known to have had to learn personally the facts here stated, give it greater weight than it would have had were it merely the observations of a transient visitor to the New World.

This document was read before the Massachusetts Historical Society by John T. Hassam, A.M., in October, 1884, and is printed in its Proceedings, vol. xxi. p. 231. It was also printed in the New-England Historical and Genealogical Register for January, 1885, and the type set for that periodical have been used to print the present issue....