A brief sketch of the work of Matthew Fontaine Maury during the war, 1861-1865 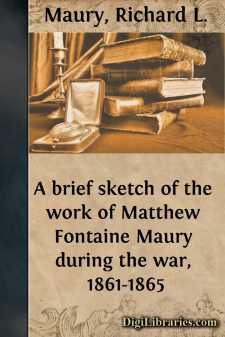 Torpedoes as effective weapons in actual war were first utilized by the Confederate navy, and Captain Matthew F. Maury introduced them into that service, and continually improved and perfected their use until they had become the mighty engine of modern warfare and revolutionized the art of coast and harbour defense. He, it was, who in 1861 mined James River, who, in person commanded the first attack with torpedoes upon the Federal fleet in Hampton Roads, and it was the development and improvement of this plan of defense which held the enemy's ships throughout the South at bay, and caused the loss of fifty-eight of the ships, and the Secretary of the United States Navy to report to Congress in 1865 that the Confederates had destroyed with their torpedoes more vessels than were lost from all other causes combined. Their use was soon extended from James River to the other Southern waters by eleven young naval officers, active and alert, who planted, directed and exploded torpedoes wherever there occurred favorable opportunity, and with a daring and coolness never surpassed; officers whose ability was abundantly shown by the remarkable inertness of the United States Navy after they had left that service in response to the call of their States to come and help protect their invasion.

Hardly had Captain Maury arrived in Richmond than his active mind was directed to the problem of protecting the Southern coasts. The South had not a single vessel of war, and but scanty means of making, equipping or manning one; the North had all the old navy fully armed and equipped, with unlimited means for making more.

Penetrated as the country is by innumerable navigable waters, and save at the entrance of a few of her largest rivers, altogether unfortified, he urged that the only available defense was to mine the channel ways with torpedoes, floating and fixed, which should be exploded by contact or by electricity, when the enemy attempted to pass. At that time there was nothing save a few shore batteries to prevent any ship whose captain was bold enough to run past their fires from ascending James River to Richmond, or from reaching any other maritime town in the South. Fortunately there were but few bold enough for the attempt.

In the beginning there was much prejudice against this mode of warfare, which, notwithstanding, has since, under Captain Maury's instruction, become the chief reliance of most maritime nations. It was considered uncivilized warfare thus to attack and destroy an unsuspecting enemy, and the United States, and many of her naval officers were specially loud in their denunciations of those who resorted to it. There was official apathy too, and opposition of friends, but regardless of such, he proceeded to experiment and demonstrate, and with such success that in time the nations of Europe became his pupils, and there were hosts of followers and fellow-workers at home, and the Confederate Congress appropriated six millions of dollars for torpedoes....