A Brief Memoir with Portions of the Diary, Letters, and Other Remains, of Eliza Southall, Late of Birmingham, England 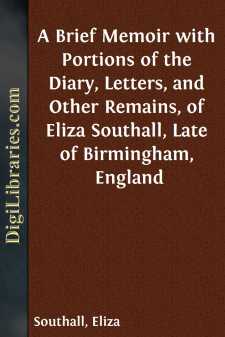 Eliza Southall, wife of William Southall, Jr., of Birmingham, England, and daughter of John and Eliza Allen, was born at Liskeard, on the 9th of 6th month, 1823.

As she felt a strong attachment to the scenes of her childhood, and an interest in the people among whom she spent the greater part of her short life,—an attachment which is evinced many times in the course of her memoranda,—it may interest the American reader to know that Liskeard is an ancient but small town in Cornwall. The country around is broken up into hill and dale, sloping down to the sea a few miles distant, the rocky shores of which are dotted with fishing-villages; in an opposite direction it swells into granite hills, in which are numerous mines of copper and lead. There is a good deal of intelligence, and also of religious feeling, to be met with among both the miners and fishermen, Cornwall having been the scene of a great revival in religion in the time of John Wesley, the effects of which have not been suffered to pass away. A meeting of Friends has been held at Liskeard from an early period in the history of the Society; but, as in many other country places in England, the numbers seem gradually to diminish, various attractions drawing the members to the larger towns. Launceston Castle, so well known in connection with the sufferings of George Fox, is a few miles distant.

The family-circle, until broken a few years before her own marriage by that of an elder sister, consisted, in addition to her parents, of five daughters, two of whom were older and two younger than Eliza. Her father was long known and deservedly esteemed by Friends in England, and her mother is an approved minister. John Allen was a man of sound judgment and of liberal and enlightened views, ever desirous of upholding the truth, but at the same time ready to listen to the arguments of those who might differ from him in opinion. Moderate and cautious in counsel and conduct, firm, yet a peacemaker, he was truly a father in the Church. For many years he took an active part in the deliberations of the Yearly Meeting, and was often employed in services connected with the Society. He was known to many Friends on the American continent, from having visited that country in 1845 by appointment of the London Yearly Meeting. He was the author of a work entitled "State Churches and the Kingdom of Christ," and of several pamphlets on religious subjects. He died in 1859.

John Allen retired from business at an early age; and a prominent reason for his doing so was that he might devote himself more fully to the education of his daughters, which was conducted almost entirely at home. Having a decided taste for the ancient classics, he considered that so good a foundation of a sound education ought not to be neglected. The same might be said of the older history and literature of his own country, including its poetry, in which he was well read; but he fully encouraged his pupils to become acquainted also with the better productions of the day, to the tone of which their younger minds were more easily adapted....