A Brief History of the English Language and Literature, Vol. 2 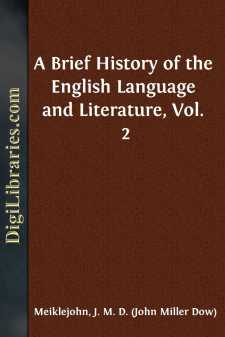 1. Tongue, Speech, Language.—We speak of the “English tongue” or of the “French language”; and we say of two nations that they “do not understand each other’s speech.” The existence of these three words—speech, tongue, language—proves to us that a language is something spoken,—that it is a number of sounds; and that the writing or printing of it upon paper is a quite secondary matter. Language, rightly considered, then, is an organised set of sounds. These sounds convey a meaning from the mind of the speaker to the mind of the hearer, and thus serve to connect man with man.

2. Written Language.—It took many hundreds of years—perhaps thousands—before human beings were able to invent a mode of writing upon paper—that is, of representing sounds by signs. These signs are called letters; and the whole set of them goes by the name of the Alphabet—from the two first letters of the Greek alphabet, which are called alpha, beta. There are languages that have never been put upon paper at all, such as many of the African languages, many in the South Sea Islands, and other parts of the globe. But in all cases, every language that we know anything about—English, Latin, French, German—existed for hundreds of years before any one thought of writing it down on paper.

3. A Language Grows.—A language is an organism or organic existence. Now every organism lives; and, if it lives, it grows; and, if it grows, it also dies. Our language grows; it is growing still; and it has been growing for many hundreds of years. As it grows it loses something, and it gains something else; it alters its appearance; changes take place in this part of it and in that part,—until at length its appearance in age is something almost entirely different from what it was in its early youth. If we had the photograph of a man of forty, and the photograph of the same person when he was a child of one, we should find, on comparing them, that it was almost impossible to point to the smallest trace of likeness in the features of the two photographs. And yet the two pictures represent the same person. And so it is with the English language. The oldest English, which is usually called Anglo-Saxon, is as different from our modern English as if they were two distinct languages; and yet they are not two languages, but really and fundamentally one and the same. Modern English differs from the oldest English as a giant oak does from a small oak sapling, or a broad stalwart man of forty does from a feeble infant of a few months old.

4. The English Language.—The English language is the speech spoken by the Anglo-Saxon race in England, in most parts of Scotland, in the larger part of Ireland, in the United States, in Canada, in Australia and New Zealand, in South Africa, and in many other parts of the world. In the middle of the fifth century it was spoken by a few thousand men who had lately landed in England from the Continent: it is now spoken by more than one hundred millions of people....