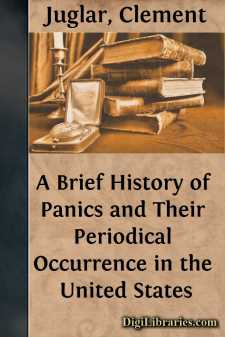 In this translation, made with the author's consent, my chief object being to convey his entire meaning, I have unhesitatingly rendered the French very freely sometimes, and again very literally. Style has thus suffered for the sake of clearness and brevity, necessary to secure and retain the attention of readers of this class of books. This same conciseness has also been imposed on our author by the inherent dryness and minuteness of his faithful inquiry into hundreds of figures, tables showing the condition of banks at the time of various panics, etc., etc., essential to his demonstration. As an extreme instance of the latitude I have sometimes allowed myself, I cite my rendering of the title: "Des Crises Commerciales et de Leur Retour Periodique en France, en Angleterre et aux Etats-Unis" merely as "Panics and Their Periodical Occurrence in the United States": for M. Juglar himself states that a commercial panic is always a financial panic, as a falling away of the metallic reserve indicates its breaking out; and I have only translated that portion dealing with the United States, deeming the rest unnecessary, for this amply illustrates and proves the theorem in hand.

To this sketch of the financial history of the United States up to 1889, when M. Juglar published his second edition, I have added a brief account to date, including the panic of 1890, the table headed "National Banks of the United States," and some additions to the other tables scattered through this book.

From the prefaces to the French editions of 1860 and of 1889, and other introductory matter, I have condensed his theory as follows:

A Crisis or Panic may be defined as a stoppage of the rise of prices: that is to say, the period when new buyers are not to be found. It is always accompanied by a reactionary movement in prices.

A panic may be broadly stated as due to overtrading, which causes general business to need more than the available capital, thus producing general lack of credit. Its precipitating causes are broadly anything leading to overtrading:

In the United States they may be classed as follows:

I. PANICS OF CIRCULATION, as in 1857, when the steadily increased circulation, which had almost doubled in nine years, had rendered it very easy to grant excessive discounts and loans, which had thus over-stimulated business, so that the above relapse occurred; or, we may imagine the converse case, leading to a quicker and even greater disaster: a sudden and proportionate shrinkage of circulation, which, of course, would have fatally cut down loans and discounts, and so precipitated general ruin.

2. A PANIC OF CREDIT, as in 1866, when the failure of Overend, Gurney, & Co. rendered the whole business world over cautious, and led to a universal shrinkage of credit. [I take the liberty of adding that it seems evident to me that such a danger must soon confront us in the United States, unless our Silver Law is changed, because of a finally inevitable distrust of the government's ability to keep 67-cent silver dollars on an equality with 100-cent gold dollars.]

3. PANICS OF CAPITAL, as in 1847, when capital was so locked up in internal improvements as to prove largely useless.

4. GENERAL TARIFF CHANGES. To the three causes given above the translator adds a fourth and most important one: Any change in our tariff laws general enough to rise to the dignity of a new tariff has with one exception in our history precipitated a panic. This exception is the tariff of 1846, which was for revenue only, and introduced after long notice and upon a graduated scale. This had put the nation at large in such good condition that when the apparently inevitable Decennial Panic occurred in 1848 recovery from it was very speedy.

The reason for this general effect of new tariffs is obvious. Usual prices and confidence are so disturbed that buyers either hold off, keeping their money available, or else draw unusually large amounts so as to buy stock before adverse tariff changes, thus tightening money in both ways by interfering with its accustomed circulation. This tendency towards contraction spreads and induces further withdrawal of deposits, thus requiring the banks to reduce their loans; and so runs on and on to increasing discomfort and uneasiness until panic is speedily produced....