A Brief History of Element Discovery, Synthesis, and Analysis 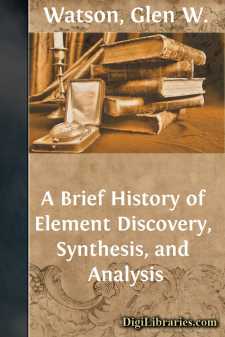 It is well known that the number of elements has grown from four in the days of the Greeks to 103 at present, but the change in methods needed for their discovery is not so well known. Up until 1939, only 88 naturally occurring elements had been discovered. It took a dramatic modern technique (based on Ernest O. Lawrence's Nobel-prize-winning atom smasher, the cyclotron) to synthesize the most recently discovered elements. Most of these recent discoveries are directly attributed to scientists working under the Atomic Energy Commission at the University of California's Radiation Laboratory at Berkeley.

But it is apparent that our present knowledge of the elements stretches back into history: back to England's Ernest Rutherford, who in 1919 proved that, occasionally, when an alpha particle from radium strikes a nitrogen atom, either a proton or a hydrogen nucleus is ejected; to the Dane Niels Bohr and his 1913 idea of electron orbits; to a once unknown Swiss patent clerk, Albert Einstein, and his now famous theories; to Poland's Marie Curie who, in 1898, with her French husband Pierre laboriously isolated polonium and radium; back to the French scientist H. A. Becquerel, who first discovered something he called a "spontaneous emission of penetrating rays from certain salts of uranium"; to the German physicist W. K. Roentgen and his discovery of x rays in 1895; and back still further.

During this passage of scientific history, the very idea of "element" has undergone several great changes.

The early Greeks suggested earth, air, fire, and water as being the essential material from which all others were made. Aristotle considered these as being combinations of four properties: hot, cold, dry, and moist (see Fig. 1).

Fig. 1. The elements as proposed by the early Greeks.

Later, a fifth "essence," ether, the building material of the heavenly bodies was added.

Paracelsus (1493-1541) introduced the three alchemical symbols salt, sulfur, and mercury. Sulfur was the principle of combustability, salt the fixed part left after burning (calcination), and mercury the essential part of all metals. For example, gold and silver were supposedly different combinations of sulfur and mercury.

Robert Boyle in his "Sceptical Chymist" (1661) first defined the word element in the sense which it retained until the discovery of radioactivity (1896), namely, a form of matter that could not be split into simpler forms.

The first discovery of a true element in historical time was that of phosphorus by Dr. Brand of Hamburg, in 1669. Brand kept his process secret, but, as in modern times, knowledge of the element's existence was sufficient to let others, like Kunkel and Boyle in England, succeed independently in isolating it shortly afterward.

As in our atomic age, a delicate balance was made between the "light-giving" (desirable) and "heat-giving" (feared) powers of a discovery. An early experimenter was at first "delighted with the white, waxy substance that glowed so charmingly in the dark of his laboratory," but later wrote, "I am not making it any more for much harm may come of it."

Robert Boyle wrote in 1680 of phosphorus, "It shone so briskly and lookt so oddly that the sight was extreamly pleasing, having in it a mixture of strangeness, beauty and frightfulness."

For the next two and three-quarters centuries the chemists had much fun and some fame discovering new elements. Frequently there was a long interval between discovery and recognition....