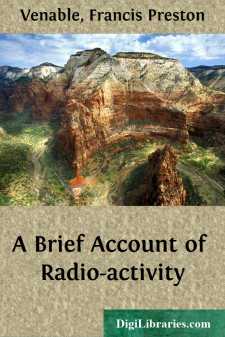 CHAPTER I DISCOVERY OF RADIO-ACTIVITY

The object of this brief treatise is to give a simple account of the development of our knowledge of radio-activity and its bearing on chemical and physical science. Mathematical processes will be omitted, as it is sufficient to give the assured results from calculations which are likely to be beyond the training of the reader. Experimental evidence will be given in detail wherever it is fundamental and necessary to a confident grasp of some of the marvelous deductions in this new branch of science. Theories cannot be avoided, but the facts remain while theories grow old and are discarded for others more in accord with the facts.

As so often happens in the history of science, the opening up of this new field with its fascinating disclosures was due to an investigation undertaken for another purpose but painstakingly carried out with a mind open to the truth wherever it might lead.

In 1895, Röntgen modestly announced his discovery of the X rays. This attracted immediate and intense interest. Among those who undertook to follow up these phenomena was Becquerel, who, because of the apparent connection with phosphorescence, tried the action of a number of phosphorescent substances upon the photographic plate, the most striking characteristic of the X rays being their effect upon such sensitive plates. In these experiments he obtained no results until he tried salts of uranium, recalling previous observations of his as to their phosphorescence. Distinct action was noted. Furthermore, he proved that this had no connection with the phenomenon of phosphorescence, as both uranic and uranous salts were active and the latter show no phosphorescence. Becquerel announced his discoveries in 1896 and this was the beginning of the new science of radio-activity.

The rays given off by uranium and its salts were found to differ from the X rays. They showed no appreciable variation in intensity, no previous exposure of the substance to light was necessary, and neither changes of temperature nor any other physical or chemical agency affected them.

At first uranium and its compounds were the only known source of these new radiations, but many other substances were examined and two years later thorium and its compounds were added to the list. In general the discharging action seemed about the same. Other elements and ordinary substances show a minute activity. Only potassium and rubidium have a greater activity than this, and theirs is only about one-thousandth that of uranium.

In examining a large number of minerals containing uranium and thorium, Mme. Curie made the important observation that many of these were more active than the elements themselves. In measuring the activity she made use of the electrical method which will be described later. In the following table giving her results for uranium minerals the numbers under i give the maximum current in amperes. They serve simply for comparison.

The last three are pure uranium and compounds of that element given for comparison with the first five, which are naturally occurring minerals....