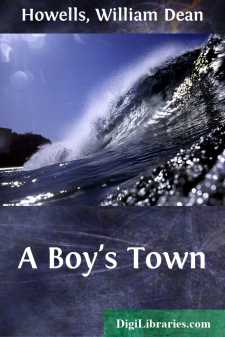 I call it a Boy's Town because I wish it to appear to the reader as a town appears to a boy from his third to his eleventh year, when he seldom, if ever, catches a glimpse of life much higher than the middle of a man, and has the most distorted and mistaken views of most things. He may then indeed look up to the sky, and see heaven open, and angels ascending and descending; but he can only grope about on the earth, and he knows nothing aright that goes on there beyond his small boy's world. Some people remain in this condition as long as they live, and keep the ignorance of childhood, after they have lost its innocence; heaven has been shut, but the earth is still a prison to them. These will not know what I mean by much that I shall have to say; but I hope that the ungrown-up children will, and that the boys who read Harper's Young People will like to know what a boy of forty years ago was like, even if he had no very exciting adventures or thread-bare escapes; perhaps I mean hair-breadth escapes; but it is the same thing—they have been used so often. I shall try to describe him very minutely in his daily doings and dreamings, and it may amuse them to compare these doings and dreamings with their own. For convenience, I shall call this boy, my boy; but I hope he might have been almost anybody's boy; and I mean him sometimes for a boy in general, as well as a boy in particular.

It seems to me that my Boy's Town was a town peculiarly adapted for a boy to be a boy in. It had a river, the great Miami River, which was as blue as the sky when it was not as yellow as gold; and it had another river, called the Old River, which was the Miami's former channel, and which held an island in its sluggish loop; the boys called it The Island; and it must have been about the size of Australia; perhaps it was not so large. Then this town had a Canal, and a Canal-Basin, and a First Lock and a Second Lock; you could walk out to the First Lock, but the Second Lock was at the edge of the known world, and, when my boy was very little, the biggest boy had never been beyond it. Then it had a Hydraulic, which brought the waters of Old River for mill power through the heart of the town, from a Big Reservoir and a Little Reservoir; the Big Reservoir was as far off as the Second Lock, and the Hydraulic ran under mysterious culverts at every street-crossing. All these streams and courses had fish in them at all seasons, and all summer long they had boys in them, and now and then a boy in winter, when the thin ice of the mild Southern Ohio winter let him through with his skates. Then there were the Commons; a wide expanse of open fields, where the cows were pastured, and the boys flew their kites, and ran races, and practised for their circuses in the tan-bark rings of the real circuses.

There were flocks of wild ducks on the Reservoirs and on Old River, and flocks of kildees on the Commons; and there were squirrels in the woods, where there was abundant mast for the pigs that ran wild in them, and battened on the nuts under the hickory-trees....