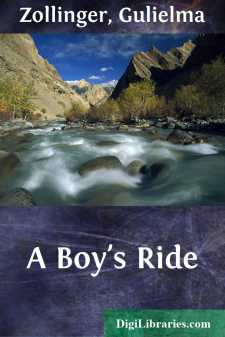 It was the last of May in the north of England, in the year 1209. A very different England from what any boy of to-day has seen. A chilly east wind was blowing. The trees of the vast forests were all in leaf but the ash trees, and they were unfolding their buds. And along a bridle-path a few miles southwest of York a lad of fourteen was riding, while behind him followed a handsome deerhound. A boy of fourteen, at that age of the world, was an older and more important personage than he is to-day. If he were well-born he had, generally, by this time, served his time as a page and was become an esquire in the train of some noble lord. That this lad had not done so was because his uncle, a prior in whose charge he had been reared since the early death of his parents, had designed him for a priest. Priest, however, he had declined to be, and his uncle had now permitted him to go forth unattended to attach himself as page to some lord, if he could.

To-day he seemed very much at home in the great wood as he glanced about him fearlessly, but so he would have been anywhere. Apparently he was unprotected from assault save by the bow he carried. In reality he wore a shirt of chain mail beneath his doublet, a precaution which he the more willingly took because of his good hope one day to be a knight, when not only the shirt of mail, but the helmet, shield, sword, and lance would be his as well.

It was not far from noon when he came to the great open place cleared of all timber and undergrowth which announced the presence of a castle. And looking up, he saw the flag of the De Aldithelys flying from its turrets.

There was a rustle in the thicket, horse and deerhound pricked up their ears, and then ran pursued by flying arrows. And now ride! ride, my brave boy, and seek shelter within the walls! For till thou reach them, thy shirt of mail must be thy salvation.

The drawbridge was yet down, for a small party of men-at-arms had just been admitted, and across it rushed boy, and horse, and dog before the warder had time to wind his horn: the horse and rider unharmed, but the deerhound wounded.

The warder stared upon the strange boy, and the boy stared back at him. And then the warder crossed himself. "'Tis some witchcraft," he muttered. "Here cometh the young lord, and all the time I know that the young lord is safe within the walls."

The grooms also crossed themselves before they drew up the bridge. But the boy, unconcerned, rode on across the outer court and passed into the inner one followed by the wounded dog. Here the men-at-arms were dismounting, horses were neighing, and grooms running about. The boy, too, dismounted, and bent anxiously over his dog.

The boy looked up to see his counterpart, the son of the lord of the castle, standing imperiously before him.

"From York," answered the stranger, briefly. "Hast thou a leech that can care for my dog? See how he bleeds."