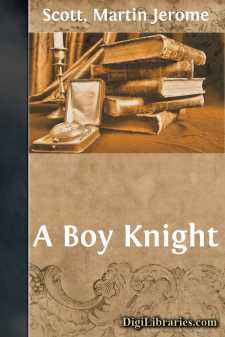 Chapter I Cross-Roads IT was late November and a little snow had fallen. Three boys were on their way down Park Avenue to school—the Regal High. One of the boys, Frank Mulvy, carried his lunch in his pocket. He did not live far away, but his mother was to be out for the day and had put up a lunch for him. As the boys came down the avenue, an old man whom they had never seen before, met them. He asked them for a few cents to get something to eat. It happened that none of the boys had any money. They told him so, and passed on. The man gave them a searching look and groaned.

When the boys had gone a block and turned the corner at Gody's drug store, Frank Mulvy made an excuse to loiter a moment, and then turning quickly, ran up the avenue. He overtook the poor man and handing him the lunch which he had in his pocket, said:

"I'm sorry I have no money, sir, but here is something to eat."

"God bless you, boy," the old man sighed, as he almost snatched the little package.

The boy had no lunch that day.

Frank Mulvy was fourteen years old. He was a freshman at Regal, a member of the football team and the secretary of the "Boy's Club" attached to St. Leonard's Church. The office was elective and Frank had been chosen with hardly a dissenting vote.

The Club met three times a week in a large room of the parish house where the boys, about ninety in number, had a good library, billiard tables, games of various kinds and other attractions. Once a week the priest in charge, Father Boone, gave them a little talk on something of interest and profit to boys. Usually these talks were very welcome to the lads as Father Boone did not so much talk virtue as illustrate it, and that not merely by stories, but rather by his own way of saying and doing things. The boys liked him.

Frank was Father Boone's right hand man, and the director was glad that the boys had elected him secretary, although he had given no indication of his preference. He allowed the boys the greatest latitude and found generally that they did the right thing. While Father Boone would be the last to give it as the cause, the fact was that they did the right thing because he himself did. He always endeavored to create an atmosphere of trust and manliness. The morale of the Club was proof that he had succeeded, for altogether the boys were a fine set, and the director considered that Frank was the best of the lot.

Father Boone was very liberal, but if he once drew a line he never allowed it to be crossed. The boys knew that. They used to say, "Father Boone is all right but if he tells you what to do, you'd better do it."

One day, just five weeks before Christmas, Father Boone called Frank aside and said to him:

"I have a bit of good news for you. A friend who is interested in the work of the Club has given me one hundred dollars to spend as I like on you boys. You are all very fond of music, and I am thinking of buying some fine records for our victrola. What do you say?"

Frank replied, "I guess it's all right, Father....