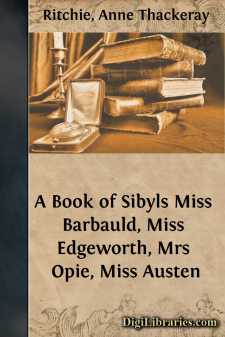 'The first poetess I can recollect is Mrs. Barbauld, with whose works I became acquainted—before those of any other author, male or female—when I was learning to spell words of one syllable in her story-books for children.' So says Hazlitt in his lectures on living poets. He goes on to call her a very pretty poetess, strewing flowers of poesy as she goes.

The writer must needs, from the same point of view as Hazlitt, look upon Mrs. Barbauld with a special interest, having also first learnt to read out of her little yellow books, of which the syllables rise up one by one again with a remembrance of the hand patiently pointing to each in turn; all this recalled and revived after a lifetime by the sight of a rusty iron gateway, behind which Mrs. Barbauld once lived, of some old letters closely covered with a wavery writing, of a wide prospect that she once delighted to look upon. Mrs. Barbauld, who loved to share her pleasures, used to bring her friends to see the great view from the Hampstead hill-top, and thus records their impressions:—

'I dragged Mrs. A. up as I did you, my dear, to our Prospect Walk, from whence we have so extensive a view.

'Yes,' said she, 'it is a very fine view indeed for a flat country.'

'While, on the other hand, Mrs. B. gave us such a dismal account of the precipices, mountains, and deserts she encountered, that you would have thought she had been on the wildest part of the Alps.'

The old Hampstead highroad, starting from the plain, winds its way resolutely up the steep, and brings you past red-brick houses and walled-in gardens to this noble outlook; to the heath, with its fresh, inspiriting breezes, its lovely distances of far-off waters and gorsy hollows. At whatever season, at whatever hour you come, you are pretty sure to find one or two votaries—poets like Mrs. Barbauld, or commonplace people such as her friends—watching before this great altar of nature; whether by early morning rays, or in the blazing sunset, or when the evening veils and mists with stars come falling, while the lights of London shine far away in the valley. Years after Mrs. Barbauld wrote, one man, pre-eminent amongst poets, used to stand upon this hill-top, and lo! as Turner gazed, a whole generation gazed with him. For him Italy gleamed from behind the crimson stems of the fir-trees; the spirit of loveliest mythology floated upon the clouds, upon the many changing tints of the plains; and, as the painter watched the lights upon the distant hills, they sank into his soul, and he painted them down for us, and poured his dreams into our awakening hearts.

He was one of that race of giants, mighty men of humble heart, who have looked from Hampstead and Highgate Hills. Here Wordsworth trod; here sang Keats's nightingale; here mused Coleridge; and here came Carlyle, only yesterday, tramping wearily, in search of some sign of his old companions. Here, too, stood kind Walter Scott, under the elms of the Judges' Walk, and perhaps Joanna Baillie was by his side, coming out from her pretty old house beyond the trees. Besides all these, were a whole company of lesser stars following and surrounding the brighter planets—muses, memoirs, critics, poets, nymphs, authoresses—coming to drink tea and to admire the pleasant suburban beauties of this modern Parnassus. A record of many of their names is still to be found, appropriately enough, in the catalogue of the little Hampstead library which still exists, which was founded at a time when the very hands that wrote the books may have placed the old volumes upon the shelves....