A Book of Prefaces 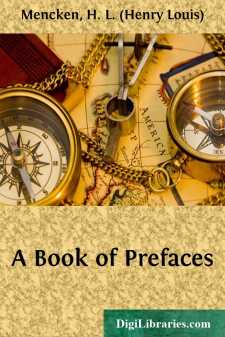 "Under all his stories there ebbs and flows a kind of tempered melancholy, a sense of seeking and not finding...." I take the words from a little book on Joseph Conrad by Wilson Follett, privately printed, and now, I believe, out of print. They define both the mood of the stories as works of art and their burden and direction as criticisms of life. Like Dreiser, Conrad is forever fascinated by the "immense indifference of things," the tragic vanity of the blind groping that we call aspiration, the profound meaninglessness of life—fascinated, and left wondering. One looks in vain for an attempt at a solution of the riddle in the whole canon of his work. Dreiser, more than once, seems ready to take refuge behind an indeterminate sort of mysticism, even a facile supernaturalism, but Conrad, from first to last, faces squarely the massive and intolerable fact. His stories are not chronicles of men who conquer fate, nor of men who are unbent and undaunted by fate, but of men who are conquered and undone. Each protagonist is a new Prometheus, with a sardonic ignominy piled upon his helplessness. Each goes down a Greek route to defeat and disaster, leaving nothing behind him save an unanswered question. I can scarcely recall an exception. Kurtz, Lord Jim, Razumov, Nostromo, Captain Whalley, Yanko Goorall, Verloc, Heyst, Gaspar Ruiz, Almayer: one and all they are destroyed and made a mock of by the blind, incomprehensible forces that beset them.

Even in "Youth," "Typhoon," and "The Shadow Line," superficially stories of the indomitable, that same consuming melancholy, that same pressing sense of the irresistible and inexplicable, is always just beneath the surface. Captain Mac Whirr gets the Nan-Shan to port at last, but it is a victory that stands quite outside the man himself; he is no more than a marker in the unfathomable game; the elemental forces, fighting one another, almost disregard him; the view of him that we get is one of disdain, almost one of contempt. So, too, in "Youth." A tale of the spirit's triumph, of youth besting destiny? I do not see it so. To me its significance, like that of "The Shadow Line," is all subjective; it is an aging man's elegy upon the hope and high resolution that the years have blown away, a sentimental reminiscence of what the enigmatical gods have had their jest with, leaving only its gallant memory behind. The whole Conradean system sums itself up in the title of "Victory," an incomparable piece of irony. Imagine a better label for that tragic record of heroic and yet bootless effort, that matchless picture, in microcosm, of the relentlessly cruel revolutions in the macrocosm!

Mr. Follett, perhaps with too much critical facility, finds the cause of Conrad's unyielding pessimism in the circumstances of his own life—his double exile, first from Poland, and then from the sea. But this is surely stretching the facts to fit an hypothesis. Neither exile, it must be plain, was enforced, nor is either irrevocable....