A Book-Lover's Holidays in the Open 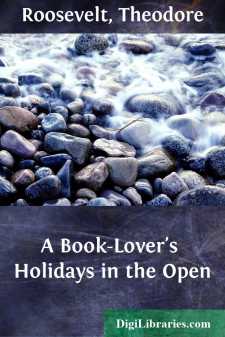 The man should have youth and strength who seeks adventure in the wide, waste spaces of the earth, in the marshes, and among the vast mountain masses, in the northern forests, amid the steaming jungles of the tropics, or on the deserts of sand or of snow. He must long greatly for the lonely winds that blow across the wilderness, and for sunrise and sunset over the rim of the empty world. His heart must thrill for the saddle and not for the hearthstone. He must be helmsman and chief, the cragsman, the rifleman, the boat steerer. He must be the wielder of axe and of paddle, the rider of fiery horses, the master of the craft that leaps through white water. His eye must be true and quick, his hand steady and strong. His heart must never fail nor his head grow bewildered, whether he face brute and human foes, or the frowning strength of hostile nature, or the awful fear that grips those who are lost in trackless lands. Wearing toil and hardship shall be his; thirst and famine he shall face, and burning fever. Death shall come to greet him with poison-fang or poison-arrow, in shape of charging beast or of scaly things that lurk in lake and river; it shall lie in wait for him among untrodden forests, in the swirl of wild waters, and in the blast of snow blizzard or thunder-shattered hurricane.

Not many men can with wisdom make such a life their permanent and serious occupation. Those whose tasks lie along other lines can lead it for but a few years. For them it must normally come in the hardy vigor of their youth, before the beat of the blood has grown sluggish in their veins.

Nevertheless, older men also can find joy in such a life, although in their case it must be led only on the outskirts of adventure, and although the part they play therein must be that of the onlooker rather than that of the doer. The feats of prowess are for others. It is for other men to face the peril of unknown lands, to master unbroken horses, and to hold their own among their fellows with bodies of supple strength. But much, very much, remains for the man who has "warmed both hands before the fire of life," and who, although he loves the great cities, loves even more the fenceless grass-land, and the forest-clad hills.

The grandest scenery of the world is his to look at if he chooses; and he can witness the strange ways of tribes who have survived into an alien age from an immemorial past, tribes whose priests dance in honor of the serpent and worship the spirits of the wolf and the bear. Far and wide, all the continents are open to him as they never were to any of his forefathers; the Nile and the Paraguay are easy of access, and the borderland between savagery and civilization; and the veil of the past has been lifted so that he can dimly see how, in time immeasurably remote, his ancestors—no less remote—led furtive lives among uncouth and terrible beasts, whose kind has perished utterly from the face of the earth. He will take books with him as he journeys; for the keenest enjoyment of the wilderness is reserved for him who enjoys also the garnered wisdom of the present and the past. He will take pleasure in the companionship of the men of the open; in South America, the daring and reckless horsemen who guard the herds of the grazing country, and the dark-skinned paddlers who guide their clumsy dugouts down the dangerous equatorial rivers; the white and red and half-breed hunters of the Rockies, and of the Canadian woodland; and in Africa the faithful black gun-bearers who have stood steadily at his elbow when the lion came on with coughing grunts, or when the huge mass of the charging elephant burst asunder the vine-tangled branches.

The beauty and charm of the wilderness are his for the asking, for the edges of the wilderness lie close beside the beaten roads of present travel. He can see the red splendor of desert sunsets, and the unearthly glory of the afterglow on the battlements of desolate mountains. In sapphire gulfs of ocean he can visit islets, above which the wings of myriads of sea-fowl make a kind of shifting cuneiform script in the air....