A Bicycle of Cathay 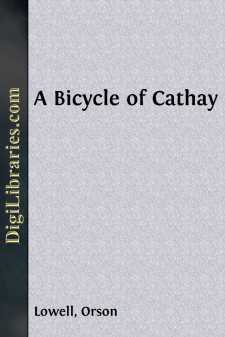 CHAPTER I THE DOCTOR'S DAUGHTER

t was a beautiful summer morning when slowly I wheeled my way along the principal street of the village of Walford. A little valise was strapped in front of my bicycle; my coat, rolled into a small compass, was securely tied under the seat, and I was starting out to spend my vacation.

I was the teacher of the village school, which useful institution had been closed for the season the day before, much to the gratification of pedagogue and scholars. This position was not at all the summit of my youthful ambition. In fact, I had been very much disappointed when I found myself obliged to accept it, but when I left college my financial condition made it desirable for me to do something to support myself while engaged in some of the studies preparatory to a professional career.

I have never considered myself a sentimental person, but I must admit that I did not feel very happy that morning, and this state of mind was occasioned entirely by the feeling that there was no one who seemed to be in the least sorry that I was going away. My boys were so delighted to give up their studies that they were entirely satisfied to give up their teacher, and I am sure that my vacation would have been a very long one if they had had the ordering of it. My landlady might have been pleased to have me stay, but if I had agreed to pay my board during my absence I do not doubt that my empty room would have occasioned her no pangs of regret. I had friends in the village, but as they knew it was a matter of course that I should go away during the vacation, they seemed to be perfectly reconciled to the fact.

As I passed a small house which was the abode of my laundress, my mental depression was increased by the action of her oldest son. This little fellow, probably five years of age, and the condition of whose countenance indicated that his mother's art was seldom exercised upon it, was playing on the sidewalk with his sister, somewhat younger and much dirtier.

As I passed the little chap he looked up and in a sharp, clear voice, he cried: "Good-bye! Come back soon!" These words cut into my soul. Was it possible that this little ragamuffin was the only one in that village who was sorry to see me depart and who desired my return? And the acuteness of this cut was not decreased by the remembrance that on several occasions when he had accompanied his mother to my lodging I had given him small coins.

I was beginning to move more rapidly along the little path, well worn by many rubber tires, which edged the broad roadway, when I perceived the doctor's daughter standing at the gate of her father's front yard. As I knew her very well, and she happened to be standing there and looking in my direction, I felt that it would be the proper thing for me to stop and speak to her, and so I dismounted and proceeded to roll my bicycle up to the gate.

As the doctor's daughter stood looking over the gate, her hands clasped the tops of the two central pickets.