A Belated Guest (from Literary Friends and Acquaintance) 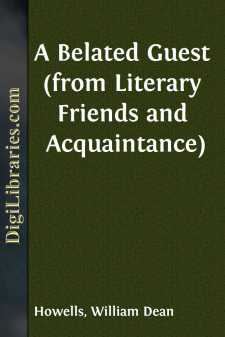 My recollections of Bret Harte begin with the arrest, on the Atlantic shore, of that progress of his from the Pacific Slope, which, in the simple days of 1871, was like the progress of a prince, in the universal attention and interest which met and followed it. He was indeed a prince, a fairy prince in whom every lover of his novel and enchanting art felt a patriotic property, for his promise and performance in those earliest tales of 'The Luck of Roaring Camp', and 'Tennessee's Partner', and 'Maggles', and 'The Outcasts of Poker Flat', were the earnests of an American literature to come. If it is still to come, in great measure, that is not Harte's fault, for he kept on writing those stories, in one form or another, as long as he lived. He wrote them first and last in the spirit of Dickens, which no man of his time could quite help doing, but he wrote them from the life of Bret Harte, on the soil and in the air of the newest kind of new world, and their freshness took the soul of his fellow-countrymen not only with joy, but with pride such as the Europeans, who adored him much longer, could never know in him.

When the adventurous young editor who had proposed being his host for Cambridge and the Boston neighborhood, while Harte was still in San Francisco, and had not yet begun his princely progress eastward, read of the honors that attended his coming from point to point, his courage fell, as if he had perhaps, committed himself in too great an enterprise. Who was he, indeed, that he should think of making this

his guest, especially when he heard that in Chicago Harte failed of attending a banquet of honor because the givers of it had not sent a carriage to fetch him to it, as the alleged use was in San Francisco? Whether true or not, and it was probably not true in just that form, it must have been this rumor which determined his host to drive into Boston for him with the handsomest hack which the livery of Cambridge afforded, and not trust to the horse-car and the local expressman to get him and his baggage out, as he would have done with a less portentous guest. However it was, he instantly lost all fear when they met at the station, and Harte pressed forward with his cordial hand-clasp, as if he were not even a fairy prince, and with that voice and laugh which were surely the most winning in the world. He was then, as always, a child of extreme fashion as to his clothes and the cut of his beard, which he wore in a mustache and the drooping side-whiskers of the day, and his jovial physiognomy was as winning as his voice, with its straight nose and fascinating thrust of the under lip, its fine eyes, and good forehead, then thickly crowned with the black hair which grew early white, while his mustache remained dark the most enviable and consoling effect possible in the universal mortal necessity of either aging or dying. He was, as one could not help seeing, thickly pitted, but after the first glance one forgot this, so that a lady who met him for the first time could say to him, "Mr. Harte, aren't you afraid to go about in the cars so recklessly when there is this scare about smallpox?" "No, madam," he could answer in that rich note of his, with an irony touched by pseudo-pathos, "I bear a charmed life."

The drive out from Boston was not too long for getting on terms of personal friendship with the family which just filled the hack, the two boys intensely interested in the novelties of a New England city and suburb, and the father and mother continually exchanging admiration of such aspects of nature as presented themselves in the leafless sidewalk trees, and patches of park and lawn. They found everything so fine, so refined, after the gigantic coarseness of California, where the natural forms were so vast that one could not get on companionable terms with them. Their host heard them without misgiving for the world of romance which Harte had built up among those huge forms, and with a subtle perception that this was no excursion of theirs to the East, but a lifelong exodus from the exile which he presently understood they must always have felt California to be....