A Bed of Roses 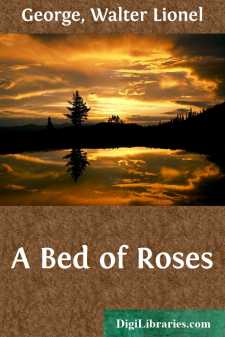 'We go.' The lascar meditatively pressed his face, brown and begrimed with coal dust, streaked here and there with sweat, against the rope which formed the rough bulwark. His dark eyes were fixed on the shore near by, between which and the ship's side the water quivered quicker and quicker in little ripples, each ripple carrying an iridescent film of grey ooze. Without joy or sadness he was bidding goodbye to Bombay, his city. Those goodbyes are often farewells for lascars who must face the Bay and the Channel. But the stoker did not care.

His companion lay by his side, lazily propped up on his elbow, not deigning even to take a last look at the market place, seething still with its crowded reds and blues and golds. 'Dekko!' cried the first stoker pointing to the wharf where a white man in a dirty smock had just cast off the last rope, which came away swishing through the air.

His companion did not raise his eyes. Slowly he tilted up his pannikin and let the water flow in a thin stream into his mouth, keeping the metal away from his lips. Then, careless of the land of Akbar, he let himself sink on the deck and composed himself to sleep. India was no concern of his.

A few yards away a woman watched them absently from the upper deck. She was conscious of them, conscious too of the slow insistent buzzing of a gadfly. Her eyes slowly shifted to the shore, passed over the market place, stopped at the Fort. There, in the open space, a troop was drilling, white and speckless, alertly wheeling at the word of command. Her eyes were still fixed on the group as the ship imperceptibly receded from the shore, throbbing steadily as the boilers got up steam. A half-naked brown boy was racing along the wharf to gain a start and beat the vessel before she reached the military crane.

The woman turned away. She was neither tall nor short: she did not attract attention overmuch but she was one of those who retain such attention as they draw. She was clad entirely in black; her face seemed to start forward intensified. Her features were regular; her mouth small. Her skin, darkened by the shadow of a broad brimmed hat, blushed still darker at the cheeks. The attraction was all in the eyes, large and grey, suggestive of energy without emotion. Her chin was square, perhaps too thick in the jaw.

She turned once more and leant against the bulwark. A yard away another woman was also standing, her eyes fixed on the shore, on a figure who waited motionless on the fast receding wharf. As the steamer kept on her course the woman craned forward, saw once more and then lost sight of the lonely figure. She was small, fair, a little insignificant, and dressed all in white drill.

The steamer had by now attained half speed. The shore was streaming by. The second woman turned her back on the bulwark, looked about aimlessly, then, perceiving her neighbour, impulsively went up to her and stood close beside her.

The two women did not speak, but remained watching the shoals fly past. Far away a train in Kolaba puffed up sharp bursts of smoke into the blue air. There was nothing to draw the attention of the beholder in that interminable shore, low-lying and muddy, splashed here and there with ragged trees. It was a desert almost, save for a village built between two swamps. Here and then smoke arose, brown and peaty from a bonfire. In the evening light the sun's declining rays lit up with radiance the red speck of a heavy shawl on the tiny figure of a brown girl.

Little by little, as the ship entered the fairway, the shore receded almost into nothingness. The two women still watched, while India merged into shadow. It was the second hour and, as the ship slowly turned towards the west, the women watched the great cocoanut trees turn into black specks upon Marla point. Then, slowly, the shore sank into the dark sea until it was gone and nothing was left of India save the vaguely paler night that tells of land and the even fainter white spears of the distant light.

For a moment they stood still, side by side. Then the fair woman suddenly put her hand on her companion's arm. 'I'm cold,' she said, 'let's go below.'

The dark girl looked at her sympathetically. 'Yes,' she said, 'let's, who'd have thought we wanted to see more of the beastly country than we could help. . . . I say, what's the matter, Molly?'

Molly was still looking towards the light; one of her feet tapped the deck nervously; she fumbled for her handkerchief....