A Battery at Close Quarters A Paper Read before the Ohio Commandery of the Loyal Legion, October 6, 1909 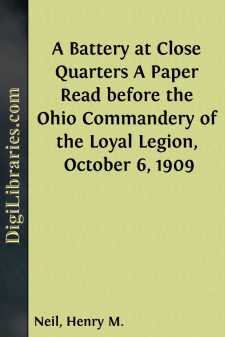 During the Civil War artillery projectiles were divided as to structure into solid, hollow and case shot. The solid shot were intended to batter down walls or heavy obstructions. Hollow projectiles, called shell and shrapnel, were for use against animate objects; to set fire to buildings and destroy lighter obstructions. Under the head of case shot we had grape and canister. Grape shot is no longer used; being superseded by the machine gun. Canister is simply a sheet iron case filled with bullets and is effective only at very short ranges.

The foremost European military writer, Hohenloe, states that in the Franco-Prussian war, the batteries of the Prussian Guard expended about twenty-five thousand shells and one canister, and that this one canister was broken in transport.

In the official reports of the recent Russo-Japanese War we find that the Arisaka gun, which was the Japanese field piece, has a range of 6,600 meters. The Russian field pieces were said to give good results at 8,000 meters, or five miles. The Japanese, and later the Russians, made a great feature of indirect fire. Having located a mass of the enemy, probably beyond two ranges of hills, they would stake out a line indicating the direction, then secure the range by the use of shells which gave out a yellowish vapor on bursting. This vapor being observed and signaled by scouts also indicated the necessary angles of departure from the line of stakes and enabled the artillerymen, miles away from actual contact, to complacently try experiments in battle ballistics with very little fear of being interrupted by an enemy.

The range of modern field artillery being officially reported at five miles, permit me to take you back to a day, over forty-seven years ago, when an Ohio battery, placed in the extreme front of battle, fought at less than fifty yards.

The village of Iuka lies in the northeast corner of the State of Mississippi. The neighboring country is broken and, in 1862, was covered with forests. Northwesterly from Iuka lies the village of Burnsville and further on the little city of Corinth, close to the Tennessee line. In 1862 Corinth possessed strategical advantages which caused it to become a large supply depot for the Federal armies. South of Corinth and southwest of Iuka, the town of Jacinto was located.

On the eighteenth of September, 1862, General Sterling Price lay at Iuka with an army of about twenty thousand Confederates. General E. O. G. Ord’s force lay between Burnsville and Corinth and had just been reinforced by Ross’s division. Burnsville was seven miles from Iuka. General Rosecrans lay at Jacinto, nineteen and one-half miles from Iuka.

General Grant, taking advantage of this situation, ordered a combined attack by Ord and Rosecrans upon General Price. Under this order Rosecrans moved from Jacinto at 3:00 A. M. September 19th, and was within striking distance of Price’s patrols by noon. Ord was to attack from the west and draw Price in that direction while Rosecrans was to move to the rebel rear by the Jacinto and Fulton roads and cut off their retreat. Neither of these Union armies was powerful enough to make, alone, a successful attack upon Price.

The strategical plan of attack above outlined was not carried out. Ord’s strategy never reached the domain of tactics, for he went into camp seven miles west of Iuka and the head of Rosecrans’ column was attacked by the entire army of Price. It was with the head of this column that the Eleventh Ohio Battery marched into the fight. Anticipating a combined engagement the head of the column pushed its innocent way into the maw of the entire rebel army....