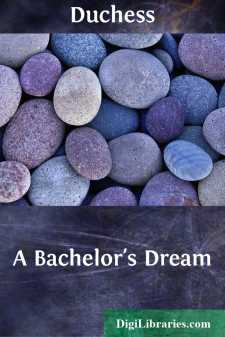 "Now what can be done?" said the Doctor. "That's the question. What on earth can I do about it?"

He put this question emphatically, with an energetic blow of his gloved hand upon his knee, and seemed very desirous of receiving an answer, although he was jogging along alone in his comfortable brougham. But the Doctor was perplexed, and wanted some one to help him out of his difficulty. He was a bachelor, and knew therefore that it was of no use letting Patrick drive him home in search of a confidant, for at home the ruling genius of his household was his housekeeper, Mrs. Jessop. She was a most excellent creature, an invaluable manager of the house, the tradespeople, and the maid-servants, and a splendid cook; the Doctor appreciated her highly, but he was not disposed to ask her advice or to invite her consolation.

He beat his knee a little harder, frowned more severely; finally let down the window, put out his head, and called smartly:

"Sir." Patrick pulled up the slim, clean-limbed brown horse as quickly as he could in the midst of the hurrying vehicles and hucksters' stalls which are usually to be found in the Essex Road at about seven o'clock on Saturday evening, and looked questioningly down at his master.

Patrick obeyed rather sulkily. He did not know what his master could possibly want at Petersham Villa—where he had already been once that day—and he did know that he himself was exceedingly hungry, and desirous of getting home. He gave the brown horse an undeserved cut over the ears with his whip; and when he pulled up he did so with a jerk which he might easily have avoided.

"I sha'n't be many minutes," said the Doctor, alighting in front of a comfortable-looking well-kept house, with red gleams of firelight shining from its parlor windows. "Walk the horse up and down to keep the cold off, but don't go far."

"It's cowld enough we'll both be, I'm thinkin'," muttered Patrick, gathering up the reins with a shiver; for it was really a very cold evening indeed, damp and gray, with a biting east wind.

If the Doctor heard this complaint, he did not heed it, his policy being, when his henchman was attacked with a fit of grumbling, to let him recover his good-temper at his leisure. He had hurried up the snow-white flight of steps, given a vigorous knock at the door, and, being admitted by a neat maid-servant, was asking if Mrs. Leslie were at home. Hearing that she was, he crossed the hall with an air of being perfectly at home, and, after tapping at the door, entered the parlor, causing a lady who was making tea to utter an exclamation of surprise, and a young lady who was making toast before the glowing fire to drop a deliciously-browned slice of bread into the cinders.

"Why, Doctor"—the tea-maker extended a plump hand good-naturedly—"you again? You are just in time for a cup of tea. I believe you came on purpose."