Zuni Fetiches Second Annual Report of the Bureau of Ethnology to the Secretary of the Smithsonian Institution, 1880-1881, Government Printing Office, Washington, 1883, pages 3-45 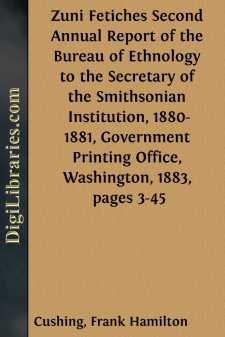 The Á-shi-wi, or Zuñis, suppose the sun, moon, and stars, the sky, earth, and sea, in all their phenomena and elements; and all inanimate objects, as well as plants, animals, and men, to belong to one great system of all-conscious and interrelated life, in which the degrees of relationship seem to be determined largely, if not wholly, by the degrees of resemblance. In this system of life the starting point is man, the most finished, yet the lowest organism; at least, the lowest because most dependent and least mysterious. In just so far as an organism, actual or imaginary, resembles his, is it believed to be related to him and correspondingly mortal; in just so far as it is mysterious, is it considered removed from him, further advanced, powerful, and immortal. It thus happens that the animals, because alike mortal and endowed with similar physical functions and organs, are considered more nearly related to man than are the gods; more nearly related to the gods than is man, because more mysterious, and characterized by specific instincts and powers which man does not of himself possess. Again, the elements and phenomena of nature, because more mysterious, powerful and immortal, seem more closely related to the higher gods than are the animals; more closely related to the animals than are the higher gods, because their manifestations often resemble the operations of the former.

In consequence of this, and through the confusion of the subjective with the objective, any element or phenomenon in nature, which is believed to possess a personal existence, is endowed with a personality analogous to that of the animal whose operations most resemble its manifestation. For instance, lightning is often given the form of a serpent, with or without an arrow-pointed tongue, because its course through the sky is serpentine, its stroke instantaneous and destructive; yet it is named WÃ­-lo-lo-a-ne, a word derived not from the name of the serpent itself, but from that of its most obvious trait, its gliding, zigzag motion. For this reason, the serpent is supposed to be more nearly related to lightning than to man; more nearly related to man than is lightning, because mortal and less mysterious. As further illustrative of the interminable relationships which are established on resemblances fancied or actual, the flint arrow-point may be cited. Although fashioned by man, it is regarded as originally the gift or "flesh" of lightning, as made by the power of lightning, and rendered more effective by these connections with the dread element; pursuant of which idea, the zigzag or lightning marks are added to the shafts of arrows. A chapter might be written concerning this idea, which may possibly help to explain the Celtic, Scandinavian, and Japanese beliefs concerning "elf-shafts," and "thunder-stones," and "bolts."

In like manner, the supernatural beings of man's fancy—the "master existences"—are supposed to be more nearly related to the personalities with which the elements and phenomena of nature are endowed than to either animals or men; because, like those elements and phenomena, and unlike men and animals, they are connected with remote tradition in a manner identical with their supposed existence to-day, and therefore are considered immortal....