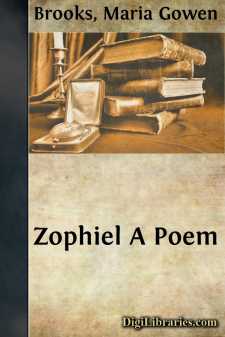 Thou with the dark blue eye upturned to heaven,And cheek now pale, now warm with radiant glow,          Daughter of God,—most dear,—          Come with thy quivering tear,And tresses wild, and robes of loosened flow,—To thy lone votaress let one look be given!

Come Poesy! nor like some just-formed maid,With heart as yet unswoln by bliss or woe;—          But of such age be seen          As Egypt's glowing queen,When her brave Roman learned to love her soThat death and loss of fame, were, by a smile, repaid.

Or as thy Sappho, when too fierce assailedBy stern ingratitude her tender breast:—          Her love by scorn repaid          Her friendship true betrayed,Sick of the guileful earth, she sank for restIn the cold waves embrace; while Grecian muse bewailed.

Be to my mortal eye, like some fair dame—Ripe, but untouched by time; whose frequent blush          Plays o'er her cheek of truth          As soft as earliest youth;While thoughts exalted to her mild eye rush—And the expanded soul, tells 'twas from heaven it came.

Daughter of life's first cause; who, when he sawThe ills that unborn innocents must bear,          When doomed to come to earth—          Bethought—and gave thee birthTo charm the poison from affliction there;And from his source eternal, bade thee draw.

He gave thee power, inferior to his ownBut in control o'er matter. 'Mid the crash          Of earthquake, war, and storm,          Is seen thy radiant formThou com'st at midnight on the lightning's flash,And ope'st to those thou lov'st new scenes and worlds unknown.

And still, as wild barbarians fiercely breakThe graceful column and the marble dome—          Where arts too long have lain          Debased at pleasure's fain,And bleeding justice called on wrath to come,'Mid ruins heaped around, thou bidst thy votarists wake.

Methinks I see thee on the broken shrineOf some fall'n temple—where the grass waves high          With many a flowret wild;          While some lone, pensive, childLooks on the sculpture with a wondering eyeWhose kindling fires betray that he is chosen thine. [FN#1]

[FN#1] Genius, perhaps, has often, nay generally, been awakened and the whole future bent of the mind thus strongly operated upon, determined, by some circumstance trivial as this.

Or on some beetling cliff—where the mad wavesRush echoing thro' the high-arched caves below,          I view some love-reft fair          Whose sighing warms the air,Gaze anxious on the ocean as it ravesAnd call on thee-alone, of power to sooth her woe.

Friend of the wretched; smoother of the couchOf pining hope; thy pitying form I know!          Where thro' the wakeful night,          By a dim taper's light,Lies a pale youth, upon his pallet low,Whose wan and woe-worn charms rekindle at thy touch....