Zoonomia, Vol. II Or, the Laws of Organic Life 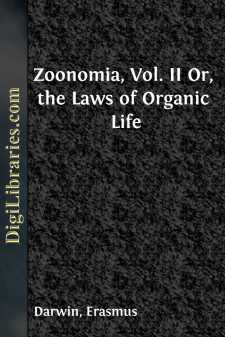 All diseases originate in the exuberance, deficiency, or retrograde action, of the faculties of the sensorium, as their proximate cause; and consist in the disordered motions of the fibres of the body, as the proximate effect of the exertions of those disordered faculties.

In the subsequent classification of diseases I have not adhered to the methods of any of those, who have preceded me; the principal of whom are the great names of Sauvages and Cullen; but have nevertheless availed myself, as much as I could, of their definitions and distinctions.

The essential characteristic of a disease consists in its proximate cause, as is well observed by Doctor Cullen, in his Nosologia Methodica, T. ii. Prolegom. p. xxix. Similitudo quidem morborum in similitudine causæ eorum proximæ, qualiscunque sit, reverâ consistit. I have taken the proximate cause for the classic character. The characters of the orders are taken from the excess, or deficiency, or retrograde action, or other properties of the proximate cause. The genus is generally derived from the proximate effect. And the species generally from the locality of the disease in the system.

Many species in this system are termed genera in the systems of other writers; and the species of those writers are in consequence here termed varieties. Thus in Dr. Cullen's Nosologia the variola or small-pox is termed a genus, and the distinct and confluent kinds are termed species. But as the infection from the distinct kind frequently produces the confluent kind, and that of the confluent kind frequently produces the distinct; it would seem more analogous to botanical arrangement, which these nosologists profess to imitate, to call the distinct and confluent small-pox varieties than species. Because the species of plants in botanical systems propagate others similar to themselves; which does not uniformly occur in such vegetable productions as are termed varieties.

In some other genera of nosologists the species have no analogy to each other, either in respect to their proximate cause, or to their proximate effect, though they may he somewhat similar in less essential properties; thus the thin and saline discharge from the nostrils on going into the cold air of a frosty morning, which is owing to the deficient action of the absorbent vessels of the nostrils, is one species; and the viscid mucus discharged from the secerning vessels of the same membrane, when inflamed, is another species of the same genus, Catarrhus....