Zoonomia, Vol. I Or, the Laws of Organic Life 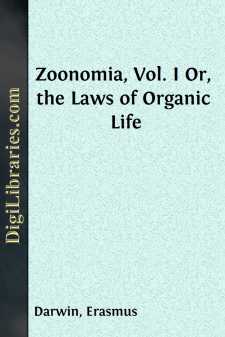 The whole of nature may be supposed to consist of two essences or substances; one of which may be termed spirit, and the other matter. The former of these possesses the power to commence or produce motion, and the latter to receive and communicate it. So that motion, considered as a cause, immediately precedes every effect; and, considered as an effect, it immediately succeeds every cause.

The primary motions of matter may be divided into three classes, those belonging to gravitation, to chemistry, and to life; and each class has its peculiar laws. Though these three classes include the motions of solid, liquid, and aerial bodies; there is nevertheless a fourth division of motions; I mean those of the supposed ethereal fluids of magnetism, electricity, heat, and light; whose properties are not so well investigated as to be classed with sufficient accuracy.

1st. The gravitating motions include the annual and diurnal rotation of the earth and planets, the flux and reflux of the ocean, the descent of heavy bodies, and other phænomena of gravitation. The unparalleled sagacity of the great NEWTON has deduced the laws of this class of motions from the simple principle of the general attraction of matter. These motions are distinguished by their tendency to or from the centers of the sun or planets.

2d. The chemical class of motions includes all the various appearances of chemistry. Many of the facts, which belong to these branches of science, are nicely ascertained, and elegantly classed; but their laws have not yet been developed from such simple principles as those above-mentioned; though it is probable, that they depend on the specific attractions belonging to the particles of bodies, or to the difference of the quantity of attraction belonging to the sides and angles of those particles. The chemical motions are distinguished by their being generally attended with an evident decomposition or new combination of the active materials.

3d. The third class includes all the motions of the animal and vegetable world; as well those of the vessels, which circulate their juices, and of the muscles, which perform their locomotion, as those of the organs of sense, which constitute their ideas.

This last class of motion is the subject of the following pages; which, though conscious of their many imperfections, I hope may give some pleasure to the patient reader, and contribute something to the knowledge and to the cure of diseases.