Zone Policeman 88; a close range study of the Panama canal and its workers 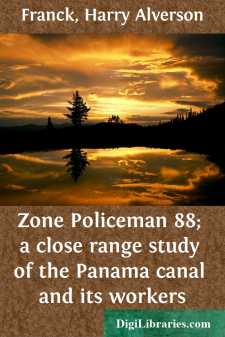 Strip by strip there opened out before me, as I climbed the "Thousand Stairs" to the red-roofed Administration Building, the broad panorama of Panama and her bay; below, the city of closely packed roofs and three-topped plazas compressed in a scallop of the sun-gleaming Pacific, with its peaked and wooded islands to far Taboga tilting motionless away to the curve of the earth; behind, the low, irregular jungled hills stretching hazily off into South America. On the third-story landing I paused to wipe the light sweat from forehead and hatband, then pushed open the screen door of the passageway that leads to police headquarters.

"Emm—What military service have you had?" asked "the Captain," looking up from the letter I had presented and swinging half round in his swivel-chair to fix his clear eyes upon me.

"No?" he said slowly, in a wondering voice; and so long grew the silence, and so plainly did there spread across "the Captain's" face the unspoken question, "Well, then what the devil are you applying here for?" that I felt all at once the stern necessity of putting in a word for myself or lose the day entirely.

"But I speak Spanish and—"

"Ah!" cried "the Captain," with the rising inflection of awakened interest, "That puts another face on the matter."

Slowly his eyes wandered, with the far-away look of inner reflection, to the vacant chair of "the Chief" on the opposite side of the broad flat desk, then out the wide-open window and across the shimmering roofs of Ancon to the far green ridges of the youthful Republic, ablaze with the unbroken tropical sunshine. The whirr of a telephone bell broke in upon his meditation. In sharp, clear-cut phrases he answered the questions that came to him over the wire, hung up the receiver, and pushed the apparatus away from him with a forceful gesture.

"Inspector:" he called suddenly; but a moment having passed without response, he went on in his sharp-cut tones, "How do you think you would like police work?"

"I believe I should."

"The Captain" shuffled for a moment one of several stacks of unfolded letters on his desk.

"Well, it's the most thankless damned job in Creation," he went on, almost dreamily, "but it certainly gives a man much touch with human nature from all angles, and—well, I suppose we do some good. Somebody's got to do it, anyway."

"Of course I suppose it would depend on what class of police work I got," I put in, recalling the warning of the writer of my letter of introduction that, "You may get assigned to some dinky little station and never see anything of the Zone,"—"I'm better at moving around than sitting still. I notice you have policemen on your trains, or perhaps in special duty languages would be—"

"Yes, I was thinking along that line, too," said "the Captain."

He rose suddenly from his chair and led the way into an adjoining room, busy with several young Americans over desks and typewriters.

"Inspector," he said, as a tall and slender yet muscular man of Indian erectness and noticeably careful grooming rose to his feet, "Here's one of those rare people, an American who speaks some foreign languages....