Zip, the Adventures of a Frisky Fox Terrier 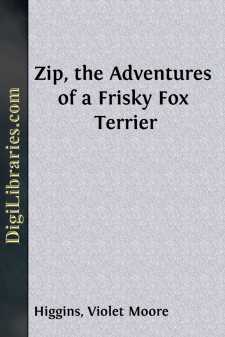 In Which Zip Is Introduced to the Reader

Zip belongs to Dr. Elsworth, who lives in the big, white house with the green blinds on the edge of the village of Maplewood. And at the present minute he is asleep on the front porch on a soft cushion in an old-fashioned rocking-chair that is swaying gently to and fro, dreaming of the days when he was a puppy chasing the white spot on the end of his tail, thinking it was something following him. And how he would bark at it and run around and around after it until he was so dizzy he would fall over! Then when the ground stopped spinning round, he would get up and go after it again, barking all the time for it to stop following him. Silly little puppy that he was, not to know it was his own tail he was chasing! Often he would bark so loudly in his sleep that it would awaken him, but he would soon fall asleep again and go on dreaming. Sometimes he would be chasing cows, holding on to their long tails; at others, squawking, cackling chickens or anything else that happened to be in the road.

One day when thus dreaming, he was just about to pull a mouthful of tail feathers out of Parson Higgins' pet rooster when the latch on the front gate clicked. Zip was awake in a minute, sitting up on the cushion with ears sticking straight up and every nerve alert to see who was coming in the doctor's yard.

The first look showed him a ragged tramp with battered hat, unshaven face and a bundle of clothes tied up in a dirty, faded red handkerchief strung on a cane over his shoulder. That one look was enough, for if there was one thing Zip despised and detested more than any other, it was a tramp. And for this one to dare to try to come in the front gate—the gate he never allowed anyone to enter unless they were well dressed—was more than he could stand, and he flew at the fellow as if he were the size of a lion and was going to devour him on the spot.

As for the tramp, he hated dogs as much as they hated him. It had been his experience that little dogs had just as sharp teeth as big ones and were much harder to drive off, as they were so quick they could get around and snap a piece out of one's shins before one could help himself. So when he saw Zip bound off the chair and come running toward him with bristles raised and teeth showing, he slammed the gate and started off down the road.

But here he did a silly thing. Instead of going off about his business, he stooped, picked up a stone and threw it at Zip, hitting him squarely on the side and hurting him dreadfully, as the stone was large and sharp. This was too much. He, Zip, would have a piece of that tramp's leg or he would know the reason why! The tramp thought he was safe in hitting the dog as the gate was shut and the fence high. But whoever yet has succeeded in shutting a little dog in a yard by a high fence? Not many people, I am sure, for the dog will always find a hole to crawl through or a pale off where he can squeeze through, or, not finding these, he will dig a hole under the fence. And this is what Zip had done many weeks before, for he found it necessary to have some place he could get through in a hurry to go after the school children who delighted in teasing him....