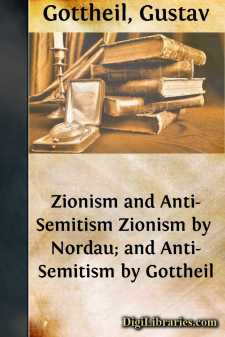 Among the persons of the educated classes who follow with any attention all the more important movements of the times, it would now be difficult to find one to whom the word "Zionism" is quite unknown. People are generally aware that it describes an idea and a movement that in the last years has found numerous adherents among the Jews of all countries, but especially among those of the East. Comparatively few, however, both among the Gentiles and the Jews themselves, have a perfectly clear notion of the aims and ways of Zionism; the Gentiles, because they do not care sufficiently for Jewish affairs to take the trouble to inform themselves at first hand as to the particulars; the Jews, because they are intentionally led astray by the enemies of Zionism, by lies and calumnies, or because even among the fervent Zionists there are not many who have probed the whole Zionist idea to the bottom, and are willing or able to present it in a clear and comprehensible fashion, without exaggeration and polemical heat.

I will endeavor to furnish readers of good faith, who are not biased, and have no other interest than that of gaining authentic information about a phenomenon in contemporary history, as concisely and soberly as possible with all the facts, as they really are, not as they are reflected in muddled brains, or distorted and falsified by calumniators.

Zionism is a new word for a very old object, in so far as it merely expresses the yearning of the Jewish people for Zion. Since the destruction of the second temple by Titus, since the dispersion of the Jewish nation in all countries, this people has not ceased to long intensely, and hope fervently, for the return to the lost land of their fathers. This yearning for, and hope in, Zion on the part of the Jews was the concrete, I might say, the geographical, aspect of their Messianic faith, which in its turn forms an essential part of their religion.

Messianism and Zionism were really, for nearly two thousand years, identical conceptions, and without caviling and hair-splitting interpretation, it would not be easy to make a distinction between the prayers for the appearance of the promised Messiah, and those for the not less promised return to the historical home,—both of which stand side by side on every page of the Jewish liturgy. These prayers were, until a few generations ago, meant literally by every Jew, as they still are by the simple believing Jews. The Jews had no other idea than that they were a people which as a punishment for its sins had lost the land of its forefathers, which was condemned to live as strangers in strange lands, and whose great sufferings would first cease when it was again assembled on the consecrated soil of the Holy Land.

This gradually changed about the middle of the eighteenth century, when enlightenment first began to find its way into Jewdom, in the person of its first herald, Moses Mendelssohn, the popular philosopher. The faith of the Jews became more lukewarm; the educated classes, where they did not simply convert themselves to Christianism, began to regard the doctrines of their religion in a rationalist manner; for them the dispersion of the Jewish people was a final and unalterable fact; they emptied the conception of the Messiah and of Zion of every concrete meaning, and arranged for themselves a singular doctrine, according to which the Zion promised to the Jews was to be understood only in a spiritual sense, as the setting up of the Jewish monotheism in the whole world, as the future triumph of Jewish ethics over the less sublime and less noble moral teaching of the other nations....