Yule-Tide in Many Lands 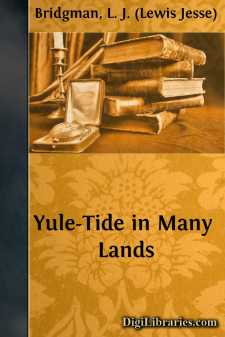 CHAPTER I. YULE-TIDE OF THE ANCIENTS "There in the Temple, carved in wood,The image of great Odin stood,And other gods, with Thor supreme among them."

As early as two thousand years before Christ Yule-tide was celebrated by the Aryans. They were sun-worshipers and believed the sun was born each morning, rode across the upper world, and sank into his grave at night.

Day after day, as the sun's power diminished, these primitive people feared that he would eventually be overcome by darkness and forced to remain in the under world.

When, therefore, after many months, he apparently wheeled about and grew stronger and stronger, they felt that he had been born again. So it came about that at Hweolor-tid, "the turning-time," there was great rejoicing at the annual re-birth of the sun.

In the myths and legends of these, our Indo-European ancestors, we find the origin of many of the Yule-tide customs now in vogue.

According to the Younger Edda, Wodin or Odin, the pioneer of the North, a descendant of Saturn, fled out of Asia. Going through Russia to Saxland (Germany), he conquered that country and left one of his sons as ruler. Then he visited Frankland, Jutland, Sweden, and Norway and established each one of his many sons on a throne.

This pioneer traveler figures under nearly two hundred different names, and so it is difficult to follow him in his wanderings. As Wodin, he established throughout the northern nations many of the observances and customs common to the people of the Northland to-day.

The Edda gives an ancient account of Balder, the sun-god, who was slain because of the jealousy of Loki (fire). Loki knew that everything in nature except the mistletoe had promised not to injure the great god Balder. So he searched for the mistletoe until he found it growing on an oak-tree "on the eastern slope of Valhalla." He cut it off and returned to the place where the gods were amusing themselves by using Balder as a target, hurling stones and darts, and trying to strike him with their battle-axes. But all these weapons were harmless. Then Loki, giving the twig of mistletoe to the blind god, Höder, directed his hand and induced him to throw it. When the mistletoe struck Balder it pierced him through and through and he fell lifeless.

"So on the floor lay Balder dead; and roundLay thickly strewn swords, axes, darts, and spears,Which all the Gods in sport had idly thrownAt Balder, whom no weapon pierced or clove;But in his breast stood fixt the fatal boughOf mistletoe, which Lok the Accuser gaveTo Höder, and unwitting Höder threw—'Gainst that alone had Balder's life no charm."

Great excitement prevailed among the assembled gods and goddesses when Balder was struck dead and sank into Hel, and they would have slain the god of darkness had it not occurred during their peace-stead, which was never to be desecrated by deeds of violence. The season was supposed to be one of peace on earth and good-will to man. This is generally attributed to the injunction of the angels who sang at the birth of Christ, but according to a much older story the idea of peace and good-will at Yule-tide was taught centuries before Christ.

Hel or "his grave"; the terms were once synonymous....