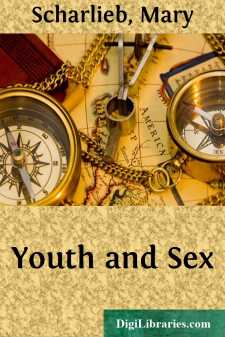 CHAPTER I. CHANGES OBSERVABLE DURING PUBERTY AND ADOLESCENCE IN GIRLS.

1. Changes in the Bodily Framework.—During this period the girl's skeleton not only grows remarkably in size, but is also the subject of well-marked alterations and development. Among the most evident changes are those which occur in the shape and inclination of the pelvis. During the years of childhood the female pelvis has a general resemblance to that of the male, but with the advent of puberty the vertical portion of the hip bones becomes expanded and altered in shape, it becomes more curved, and its inner surface looks less directly forward and more towards its fellow bone of the other side. The brim of the pelvis, which in the child is more or less heart-shaped, becomes a wide oval, and consequently the pelvic girdle gains considerably in width. The heads of the thigh bones not only actually, in consequence of growth, but also relatively, in consequence of change of shape in the pelvis, become more widely separated from each other than they are in childhood, and hence the gait and the manner of running alters greatly in the adult woman. At the same time the angle made by the junction of the spinal column with the back of the pelvis, known as the sacro-vertebral angle, becomes better marked, and this also contributes to the development of the characteristic female type. No doubt the female type of pelvis can be recognised in childhood, and even before birth, but the differences of male and female pelves before puberty are so slight that it requires the eye of an expert to distinguish them. The very remarkable differences that are found between the adult male and the adult female pelvis begin to appear with puberty and develop rapidly, so that no one could mistake the pelvis of a properly developed girl of sixteen or eighteen years of age for that of a boy. These differences are due in part to the action of the muscles and ligaments on the growing bones, in part to the weight of the body from above and the reaction of the ground from beneath, but they are also largely due to the growth and development of the internal organs peculiar to the woman. All these organs exist in the normal infant at birth, but they are relatively insignificant, and it is not until the great developmental changes peculiar to puberty occur that they begin to exercise their influence on the shape of the bones. This is proved by the fact that in those rare cases in which the internal organs of generation are absent, or fail to develop, there is a corresponding failure in the pelvis to alter into the normal adult shape. The muscles of the growing girl partake in the rapid growth and development of her bony framework. Sometimes the muscles outgrow the bones, causing a peculiar lankiness and slackness of figure, and in other girls the growth of the bones appears to be too rapid for the muscles, to which fact a certain class of "growing pain" has been attributed.

Another part of the body that develops rapidly during these momentous years is the bust. The breasts become large, and not only add to the beauty of the girl's person, but also manifestly prepare by increase of their glandular elements for the maternal function of suckling infants.

Of less importance so far as structure is concerned, but of great importance to female loveliness and attractiveness, are the changes that occur in the clearing and brightening of the complexion, the luxuriant growth, glossiness, and improved colour of the hair, and the beauty of the eyes, which during the years which succeed puberty acquire a new and singularly attractive expression.

The young girl's hands and feet do not grow in proportion with her legs and arms, and appear to be more beautifully shaped when contrasted with the more fully developed limb.

With regard to the internal organs, the most important are those of the pelvis. The uterus, or womb, destined to form a safe nest for the protection of the child until it is sufficiently developed to maintain an independent existence, increases greatly in all its dimensions and undergoes certain changes in shape; and the ovaries, which are intended to furnish the ovules, or eggs (the female contribution towards future human beings), also develop both in size and in structure....