Young Wild West at "Forbidden Pass" and, How Arietta Paid the Toll

by An Old Scout 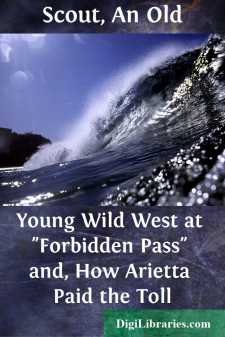 It was just about five o'clock in the afternoon of a cool day in autumn when Young Wild West and his friends rode into a little mining camp called Big Bonanza, which was situated in the heart of the range, known as the Silver Bend Mountains, Nevada.

It was the first signs of anything like civilization that the party had seen in two days, and though there were but half a dozen little shanties in it, the sight of it was a welcome one.

Young Wild West was beyond a doubt the greatest and best known of the heroes of the Wild West, and though but a boy in years, he had made a name for himself that many an elder person would have been proud to own.

He had earned the title of the Champion Deadshot of the West by his remarkable skill with the rifle and revolver, and he was ever ready to defend the title against all comers.

Many of his warmest friends called him the Prince of the Saddle, because he was without a peer at breaking and riding the wildest and most vicious horses of the West.

When upon the back of the beautiful sorrel stallion he always rode he made a picture that was dashing and handsome in the extreme. When on his trips through the wildest parts of the Great West he invariably was attired in a fancy buckskin hunting suit, and with his sombrero tipped well back upon his head, he surely showed up as a dashing young hero.

The flash in his eye told of his courage and persistence, while his athletic form betokened his strength and quickness.

But of all his qualifications to make up a dashing young Westerner his greatest was his coolness and fixed purpose to do right, no matter what the cost might be.

Few, indeed, are possessed of such sterling qualities, and it is only those who are that make real heroes.

But, as we have already stated, and the majority of our readers know, Young Wild West was a genuine boy hero of the Wild West, and that is only saying the truth.

Being the owner of several gold and silver mines, the young deadshot had an income that was more than sufficient to permit him to pursue his favorite hobby, which was riding about through the wildest parts of the states and territories in search of adventure.

At the time of which we write there was plenty of excitement and adventure to be found in that region, and Young Wild West was helping along the advance of civilization, which, by the way, has not reached all parts of the West yet, speaking in a true sense, and reckoning in law and order.

In company with our boy hero were his two partners, Cheyenne Charlie and Jim Dart, and two very pretty young girls and a young woman.

Cheyenne Charlie was a government scout and one of the best known Indian-fighters of his time. He was yet a young pan, and though he had been "through the mill," as the saying goes, he was better satisfied to be led than to lead, and thus it was that he had cast his lot with Wild.

The scout was a tall man, straight as an arrow, and his long black hair and mustache, together with his bronzed face, gave him the appearance of being just what he was—an out-and-out Westerner....