Young Tom Bowling The Boys of the British Navy 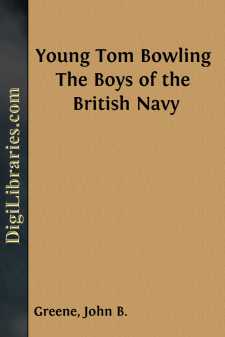 Father and I “Argue the Point.”

“Hullo, father!” I sang out, when we had got a little way out from the pontoon and opened the mouth of the harbour, noticing, as I looked over my shoulder to see how we were steering, a string of flags being run up aboard the old Saint Vincent. “They’re signalling away like mad this morning all over the shop! First, atop of the dockyard semaphore; and then the flagship and the old Victory, both of ’em, blaze out in bunting; while now the Saint Vincent joins in at the game of ‘follow-my-leader.’ I wonder what’s up?”

“Lor’ bless you, Tom!” rejoined father, still steadily tugging on at his stroke oar as we pursued our course towards the middle of the stream, so that we might take advantage of the last of the flood, and allow the gradually slackening tide, which was nearly at the turn, to drift us down alongside the old Victory, whither we were bound to pick up a fare for the shore—“nothing in pertickler’s up anyways uncommon that I sees, sonny; and as for the buntin’ that you’re making sich a fuss about, why, they’ve hauled all that down, and pretty near unbent all the signal flags, too, and stowed ’em away in their lockers by this time!”

“But, father,” I persisted, “they don’t always go on like this for nothing, I know!”

“In coorse they don’t, stoopid!” said he, giving the water an angry splash as he reached forwards, the blade of his oar sending up a tidy sprinkle across my face. “Why, where’s your wits, Tom, this mornin’?”

“Where you put them, father,” I replied with a laugh; “you know I’m your son, and mother says I’m ‘a chip of the old block’ whenever she’s a bit put out with me.”

“None o’ your imporence, Tom,” said he, laughing too; for he and I were the best of friends, and I don’t think we ever had a serious difference about anything since first I was able to toddle down to the Hard, a little mite of four or five, to see him put off in his wherry, and sometimes go out for a sail with him on the sly when mother wasn’t watching us, up to the time, as now, when I could help him with an oar. “None o’ your imporence, you young jackanapes. But touching that there signallin’, I’m surprised, sonny, you don’t know by this time that when the commander-in-chief up at Admiralty House, in the dockyard, wishes for to communicate to some ship out at Spithead, he telegraphs from his office to the semaphore, which h’ists his orders, and then every ship in port’s bound to repeat the signal till the craft he means it for runs up her answering pennant, for to show us how she’s took the signal in and underconstubled it.”

“Oh yes, father, I know that,” said I, leading him on purposely. “But what is the signal they’ve been so busy about this morning? I can’t make it out at all.”

“Tom Bowling, junior, I’m right down ashamed on you for a son o’ mine!” he said, digging away at his oar savagely, as if trying to dredge up some of the silt from the bottom of the harbour....