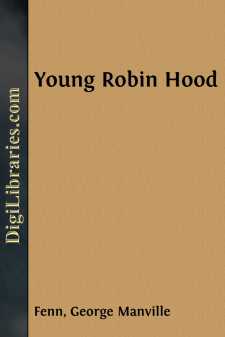 Sit still, will you? I never saw such a boy: wriggling about like a young eel."

"I can't help it, David," said the little fellow so roughly spoken to by a sour-looking serving man; "the horse does jog so, and it's so slippery. If I didn't keep moving I should go off."

"You'll soon go off if you don't keep a little quieter," growled the man angrily, "for I'll pitch you among the bushes."

"What! I'll let you see, young master. I want to know why they couldn't let you have a donkey or a mule, instead of hanging you on behind me."

"Aunt said I should be safer behind you," said the boy; "but I'm not. It's so hard to hold on by your belt, because you're so——"

"Look here. Master Robin, I get enough o' that from the men. If you say I'm so fat, I'll pitch you into the first patch o' brambles we come to."

"But you are fat," said the boy; "and you dare not. If you did my father would punish you."

"Oh! yes he would, David," said the little fellow, confidently; "the other men would tell him."

"They wouldn't know," said the man with a chuckle. "I say, aren't you afraid?"

"'Fraid of going through this great dark forest?"

"Robbers and thieves, and all sorts of horrid things. Why, we might meet Robin Hood and his men."

"What?" cried the serving man, and he looked round at the great oak and beech trees through which the faintly marked road lay, and then forward and backward at the dozen mules, laden with packs of cloth, every two of which were led by an armed man. "You'd like that?"

"Turn my belt round?" said the man, in astonishment. "What for?"

"So as to put the sword the other side. It does keep on banging my legs so. They're quite bruised."

"It's me that'll be bruised, with you punching and sticking your fisties into my belt. Put your legs on the other side. I can't move my sword. I might want it to fight, you know."

"Robbers after the bales o' cloth. I shall be precious glad to get 'em safe to the town, and be back home again with whole bones. Sit still, will you! Wriggling again! How am I to get you safe home to your father if you keep sidling off like that? Want me to hand you over to one of the men?"

"Yes, I do," said the boy. "I should be more comfortable sitting on one of the packs. I'm sure aunt would have said I was to sit there, if she had known."

"Look here, young squire," said the man, sourly; "you've too much tongue, and you know too much what aren't good for you. Your aunt, my old missus, says to me:

"'David,' she says, 'you are to take young Master Robin behind you on the horse, where he can hold on by your belt, and you'll never lose sight of him till you give him into his father the Sheriff's hands, along with the bales of cloth; and you can tell the Sheriff he has been a very good boy during his visit'; and now I can't."