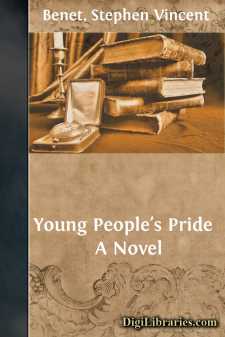 It is one of Johnny Chipman's parties at the Harlequin Club, and as usual the people the other people have been asked to meet are late and as usual Johnny is looking hesitatingly around at those already collected with the nervous kindliness of an absent-minded menagerie-trainer who is trying to make a happy family out of a wombat, a porcupine, and two small Scotch terriers because they are all very nice and he likes them all and he can't quite remember at the moment just where he got hold of any of them. This evening he has been making an omelet of youngest. K. Ricky French, the youngest Harvard playwright to learn the tricks of C43, a Boston exquisite, impeccably correct from his club tie to the small gold animal on his watch-chain, is almost coming to blows with Slade Wilson, the youngest San Francisco cartoonist to be tempted East by a big paper and still so new to New York that no matter where he tries to take the subway, he always finds himself buried under Times Square, over a question as to whether La Perouse or Foyot's has the best hors-d'oeuvres in Paris.

The conflict is taking place across Johnny's knees, both of which are being used for emphasis by the disputants till he is nearly mashed like a sandwich-filling between two argumentative slices of bread, but he is quite content. Peter Piper, the youngest rare-book collector in the country, who, if left to himself, would have gravitated naturally toward French and a devastating conversation in monosyllables on the pretty failings of prominent débutantes, is gradually warming Clark Stovall, the youngest star of the Provincetown Players out of a prickly silence, employed in supercilious blinks at all the large pictures of celebrated Harlequins by discreet, intelligent questions as to the probable future of Eugene O'Neill.

Stovall has just about decided to throw Greenwich Village omniscience overboard and admit privately to himself that people like Peter can be both human and interesting even if they do live in the East Sixties instead of Macdougal Alley when a page comes in discreetly for Johnny Chipman. Johnny rises like an agitated blond robin who has just spied the very two worms he was keeping room for to top off breakfast. "Well" he says to the world at large. "They're only fifteen minutes late apiece this time."

He darts out into the hall and reappears in a moment, a worm on either side. Both worms will fit in easily with the youthful assortment already gathered—neither can be more than twenty-five.

Oliver Crowe is nearly six feet, vividly dark, a little stooping, dressed like anybody else in the Yale Club from hair parted in the middle to low heavyish brown shoes, though the punctured patterns on the latter are a year or so out of date. There is very little that is remarkable about his appearance except the round, rather large head that shows writer or pugilist indifferently, brilliant eyes, black as black warm marble under heavy tortoise-shell glasses and a mouth that is not weak in the least but somehow burdened by a pressure upon it like a pressure of wings, the pressure of that kind of dream which will not release the flesh it inhabits always and agonizes often until it is given perfect body and so does not release it until such flesh has ceased....