Young Lucretia and Other Stories 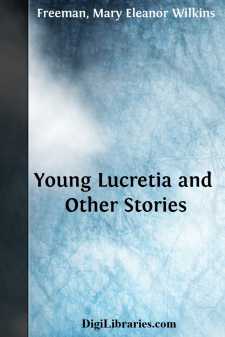 "Who's that little gal goin' by?" said old Mrs. Emmons.

"That—why, that's young Lucretia, mother," replied her daughter Ann, peering out of the window over her mother's shoulder. There was a fringe of flowering geraniums in the window; the two women had to stretch their heads over them.

"I don't see much to pity her for," Ann returned, in a voice high-pitched and sharply sweet; she was the soprano singer in the village choir. "I don't see why she isn't taken care of as well as most children."

"Well, I don't know but she's took care of, but I guess she don't get much coddlin'. Lucretia an' Maria ain't that kind—never was. I heerd the other day they was goin' to have a Christmas-tree down to the school-house. Now I'd be will-in' to ventur' consider'ble that child don't have a thing on't."

"Well, if she's kept clean an' whole, an' made to behave, it amounts to a good deal more'n Christmas presents, I suppose." Ann sat down and turned a hem with vigor: she was a dress-maker.

"Well, I s'pose it does, but it kinder seems as if that little gal ought to have somethin'. Do you remember them little rag babies I used to make for you, Ann? I s'pose she'd be terrible tickled with one. Some of that blue thibet would be jest the thing to make it a dress of."

"Now, mother, you ain't goin' to fussing. She won't think anything of it."

"Yes, she would, too. You used to take sights of comfort with 'em." Old Mrs. Emmons, tall and tremulous, rose up and went out of the room.

"She's gone after the linen pieces," thought her daughter Ann. "She is dreadfully silly." Ann began smoothing out some remnants of blue thibet on her lap. She selected one piece that she thought would do for the dress.

Meanwhile young Lucretia went to school. It was quite a cold day, but she was warmly dressed. She wore her aunt Lucretia's red and green plaid shawl, which Aunt Lucretia had worn to meeting when she was herself a little girl, over her aunt Maria's black ladies' cloth coat. The coat was very large and roomy—indeed, it had not been altered at all—but the cloth was thick and good. Young Lucretia wore also her aunt Maria's black alpaca dress, which had been somewhat decreased in size to fit her, and her aunt Lucretia's purple hood with a nubia tied over it. She had mittens, a black quilted petticoat, and her aunt Maria's old drab stockings drawn over her shoes to keep the snow from her ankles. If young Lucretia caught cold, it would not be her aunts' fault. She went along rather clumsily, but quite merrily, holding her tin dinner-pail very steady. Her aunts had charged her not to swing it, and "get the dinner in a mess."

Young Lucretia's face, with very pink cheeks, and smooth lines of red hair over the temples, looked gayly and honestly out of the hood and nubia. Here and there along the road were sprigs of evergreen and ground-pine and hemlock. Lucretia glanced a trifle soberly at them. She was nearly in sight of the school-house when she reached Alma Ford's house, and Alma came out and joined her....