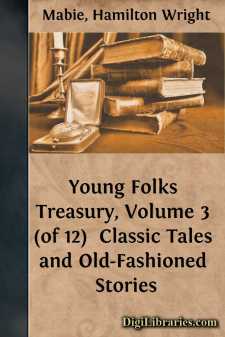 I HOW DON QUIXOTE WAS KNIGHTED

Some three or four hundred years ago, there lived in sunny Spain an old gentleman named Quixada, who owned a house and a small property near a village in La Mancha.

With him lived his niece, a housekeeper, and a man who looked after Quixada's farm and his one old white horse, which, though its master imagined it to be an animal of great strength and beauty, was really as lean as Quixada himself and as broken down as any old cab horse.

Quixada had nothing in the world to do in the shape of work, and so, his whole time was taken up in reading old books about knights and giants, and ladies shut up in enchanted castles by wicked ogres. In time, so fond did he become of such tales that he passed his days, and even the best part of his nights, in reading them. His mind was so wholly taken up in this way that at last he came to believe that he himself lived in a land of giants and of ogres, and that it was his duty to ride forth on his noble steed, to the rescue of unhappy Princesses.

In the lumber-room of Quixada's house there had lain, ever since he was born, a rusty old suit of armor, which had belonged to his great-grandfather. This was now got out, and Quixada spent many days in polishing and putting it in order.

Unfortunately, there was no more than half of the helmet to be found, and a knight cannot ride forth without a helmet.

So Quixada made the other half of strong pasteboard; and to prove that it was strong enough, when finished, he drew his sword and gave the helmet a great slash. Alas! a whole week's work was ruined by that one stroke; the pasteboard flew into pieces. This troubled Quixada sadly, but he set to work at once and made another helmet of pasteboard, lining it with thin sheets of iron, and it looked so well that, this time, he put it to no test with his sword.

Now that his armor was complete, it occurred to him that he must give his horse a name—every knight's horse should have a good name—and after four days thought he decided that "Rozinante" would best suit the animal.

Then, for himself, after eight days of puzzling, he resolved that he should be called Don Quixote de la Mancha.

There was but one thing more. Every knight of olden time had a lady, whom he called the Mistress of his Heart, whose glove he wore in his helmet; and if anybody dared to deny that this lady was the most beautiful woman in the whole world, then the knight made him prove his words by fighting.

So it was necessary that Don Quixote should select some lady as the Mistress of his Heart.

Near La Mancha there lived a stout country lass, for whom some years before Don Quixote had had a kind of liking. Who, therefore, could better take the place of Mistress of his Heart? To whom could he better send the defeated knights and ogres whom he was going out to fight? It was true that her name. Aldonza Lorenzo, did not sound like that of a Princess or lady of high birth; so he determined in future to call her Dulcinea del Toboso. No Princess could have a sweeter name...!