Young Captain Jack The Son of a Soldier 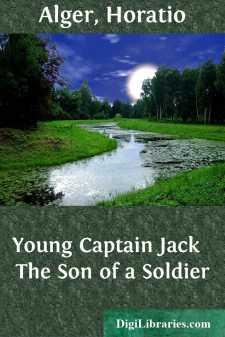 THE ENCOUNTER ON THE BRIDGE.

"Wait a second, please, until I haul in this fish. He's such a beauty I don't wish to lose him."

"Do you suppose I'm going to bother with your fish? Get out of the way, I say!" And the man, who sat astride of a coal-black horse, shook his hand threateningly. He was dressed in the uniform of a surgeon in the Confederate Army, and his face was dark and crafty.

The boy, who was but fourteen and rather slenderly built, looked up in surprise. He was seated on the side of a narrow bridge spanning a mountain stream flowing into the ocean, and near him rested a basket half-filled with fish. He had been on the point of hauling in another fish—of extra size—but now his prize gave a sudden flip and disappeared from view.

"Gone! and you made me miss him!" he cried, much vexed.

"Shut up about your fish and get out of the way!" stormed the man on the horse. "Am I to be held up here all day by a mere boy?"

"Excuse me, but I have as much right on this bridge as you," answered the boy, looking the man straight in the eyes.

"Perhaps you think yourself of just as much importance as a surgeon in the army, on an important mission."

"I didn't say that. I said I had just as much right on this bridge as you. It's a public bridge."

"Bah! get out of the way and let me pass. I've wasted time enough on you." The man tugged nervously at his heavy mustache. "Which is the way to Tanner's Mill?"

To this the youth made no reply. Gathering up his fishing rod and his basket, he stepped to the river bank and prepared to make another cast into the water.

"I say, tell me the way to Tanner's Mill," repeated the man.

"I reckon you had better go elsewhere for your information," returned the boy quietly, but with a faint smile playing over his handsome, sunburned face.

"What, you young rascal, you won't tell me?" stormed the man.

"You are a rascal," was the snappy reply. "Answer my question, or it will be the worse for you," and now the man leaped to the ground and advanced with clenched fists. Possibly he thought the youth would retreat; if so, he was mistaken.

"Because you haven't treated me decently; that's why."

"You hold a mighty big opinion of yourself."

"Perhaps you are a Northern mudsill."

"No, I am just as loyal to the South as you or anybody."

"I wouldn't care to take your word on that point, youngster. I am on an important mission, and if you sympathize with our South in this great war you'll direct me to the short way to Tanner's Mill."

"Do they expect a fight at Tanner's Mill?"

"Don't bother me with questions. Show me the road, and I'll be off."

"Keep to the right and you'll be right," answered the youth, after a pause, and then he resumed his fishing.

The man scowled darkly as he leaped again into the saddle....