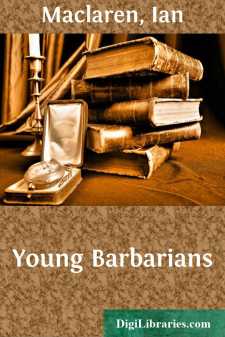 Muirtown Seminary was an imposing building of the classical order, facing the north meadow and commanding from its upper windows a fine view of the river Tay running rapidly and cleanly upon its gravel bed. Behind the front building was the paved court where the boys played casual games in the breaks of five minutes between the hours of study, and this court had an entrance from a narrow back street along which, in snow time, a detachment of the enemy from the other schools might steal any hour and take us by disastrous surprise. There were those who wished that we had been completely walled up at the back, for then we had met the attack at a greater advantage from the front. But the braver souls of our commonwealth considered that this back way, affording opportunities for ambushes, sallies, subtle tactics, and endless vicissitudes, lent a peculiar flavour to the war we waged the whole winter through and most of the summer, and brought it nearer to the condition of Red Indian fighting, which was our favourite reading and our example of heroism. Again and again we studied the adventures of Bill Biddon, the Indian spy, not only on account of his hairbreadth escapes when he eluded the Indians after a miraculous fashion and detected the presence of the red varmint by the turning of a leaf on the ground, but also in order to find out new methods of deceit by which we could allure our Indians into narrow places, or daring methods of attack by which we could successfully outflank them on the broader street and drive them into their own retreats with public ignominy.

Within the building the glory of the Seminary was a massive stone stair, circular in shape, and having a "well" surrounded on the ground floor by a wall some three feet high. Down this stair the masters descended at nine o'clock for the opening of the school, with Bulldog, who was the mathematical master and the awful pride of the school, at their head, and it was strictly forbidden that any boy, should be found within the "well." As it was the most tempting of places for the deposit of anything in the shape of rubbish, from Highland bonnets to little boys, and especially as any boy found in the well was sure to be caned, there was an obvious and irresistible opportunity for enterprise. Peter McGuffie, commonly called the Sparrow, or in Scotch tongue "Speug," and one of the two heads of our commonwealth, used to wait with an expression of such demureness that it ought to have been a danger signal till Bulldog was halfway down the stair, and a row of boys were standing in expectation with their backs to the forbidden place. Then, passing swiftly along, he swept off half a dozen caps and threw them over, and suddenly seizing a tempting urchin landed him on the bed of caps which had been duly prepared. Without turning his head one-eighth of an inch, far less condescending to look over, Bulldog as he passed made a mental note of the prisoner's name, and identified the various bonnetless boys, and then, dividing his duty over the hours of the day, attended to each culprit separately and carefully. If any person, from the standpoint of this modern and philanthropic day, should ask why some innocent victim did not state his case and lay the blame upon the guilty, then it is enough to say that that person had never been a scholar at Muirtown Seminary, and has not the slightest knowledge of the character and methods of Peter McGuffie. Had any boy of our time given information to a master, or, in the Scotch tongue, "had clyped," he would have had the coldest reception at the hands of Bulldog, and when his conduct was known to the school he might be assured of such constant and ingenious attention at the hands of Speug that he would have been ready to drown himself in the Tay rather than continue his studies at Muirtown Seminary.

Speug's father was the leading horsedealer of the Scots Midlands, and a sporting man of established repute, a short, thick-set, red-faced, loud-voiced, clean-shaven man, with hair cut close to his head, whose calves and whose manner were the secret admiration of Muirtown. Quiet citizens of irreproachable respectability and religious orthodoxy regarded him with a pride which they would never confess; not because they would have spoken or acted as he did for a king's ransom, and not because they would have liked to stand in his shoes when he came to die—considering, as they did, that the future of a horsedealer and an owner of racing horses was dark in the extreme—but because he was a perfect specimen of his kind and had made the town of Muirtown to be known far and wide in sporting circles....