Young Alaskans in the Far North 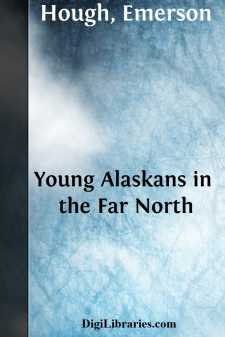 THE START FOR THE MIDNIGHT SUN

Well, fellows,” said Jesse Wilcox, the youngest of the three boys who stood now at the ragged railway station of Athabasca Landing, where they had just disembarked, “here we are once more. For my part, I’m ready to start right now.”

He spoke somewhat pompously for a youth no more than fifteen years of age. John Hardy and Rob McIntyre, his two companions, somewhat older than himself, laughed at him as he sat now on his pack-bag, which had just been tossed off the baggage-car of the train that had brought them hither.

“You might wait for Uncle Dick,” said John. “He’d feel pretty bad if we started off now for the Arctic Circle and didn’t allow him to come along!”

Rob, the older of the three, and the one to whom they were all in the habit of looking up in their wilderness journeyings, smiled at them both. He was not apt to talk very much in any case, and he seemed now content in these new surroundings to sit and observe what lay about him.

It was a straggling little settlement which they saw, with one long, broken street running through the center. There was a church spire, to be sure, and a square little wooden building in which some business men had started a bank for the sake of the coming settlers now beginning to pass through for the country along the Peace River. There were one or two stores, as the average new-comer would have called them, though each really was the post of one of the fur-trading companies then occupying that country. Most prominent of these, naturally, was the building of the ancient Hudson’s Bay Company.

A rude hotel with a dirty bar full of carousing half-breeds and rowdy new-comers lay just beyond the end of the uneven railroad tracks which had been laid within the month. The surface of the low hills running back from the Athabasca River was covered with a stunted growth of aspens, scattered among which here and there stood the cabins or board houses of the men who had moved here following the rush of the last emigration to the North. There were a few tents and lodges of half-breeds also scattered about.

“Well, Uncle Dick said we would be starting right away,” argued Jesse, a trifle crestfallen.

“Yes,” said Rob, “but he told me we would be lucky if ‘right away’ meant inside of a week. He said the breeds always powwow around and drink for a few days before they start north with the brigade for a long trip. That’s a custom they have. They say the Hudson’s Bay Company has more customs than customers these days. Times are changing for the fur trade even here.

“Where’s your map, John?” he added; and John spread out on the platform where they stood his own rude tracing of the upper country which he had made by reference to the best government maps obtainable. Their uncle Dick, engineer of this new railroad and other frontier development enterprises, of course had a full supply of these maps, but it pleased the boys better to think that they made their own maps—as indeed they always had in such earlier trips as those across the Rockies, down the Peace River, in the Kadiak Island country, or along the headwaters of the Columbia, where, as has been told, they had followed the trails of the wilderness in their adventures before this time....