Young Adventure, a Book of Poems 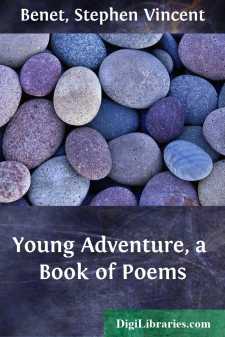 In these days when the old civilisation is crumbling beneath our feet, the thought of poetry crosses the mind like the dear memory of things that have long since passed away. In our passionate desire for the new era, it is difficult to refrain oneself from the commonplace practice of speculating on the effects of warfare and of prophesying all manner of novel rebirths. But it may be well for us to remember that the era which has recently closed was itself marked by a mad idealisation of all novelties. In the literary movements of the last decade —when, indeed, any movement at all has been perceptible — we have witnessed a bewildering rise and fall of methods and ideals. We were captivated for a time by the quest of the golden phrase and the accompanying cultivation of exotic emotions; and then, wearying of the pretty and the temperamental, we plunged into the bloodshot brutalities of naturalism.

From the smooth-flowing imitations of Tennyson and Swinburne, we passed into a false freedom that had at its heart a repudiation of all law and standards, for a parallel to which one turns instinctively to certain recent developments in the political world. We may hope that the eager search for novelty of form and subject may have its influence in releasing us from our old bondage to the commonplace and in broadening the scope of poetry; but we cannot blind ourselves to the fact that it has at the same time completed that estrangement between the poet and the general public which has been developing for half a century. The great mass of the reading world, to whom the arts should minister, have now forgotten that poetry is a consolation in times of doubt and peril, a beacon, and "an ever-fixed mark" in a crazed and shifting world. Our poetry —and I am speaking in particular of American poetry — has been centrifugal; our poets have broken up into smaller and ever smaller groups. Individualism has triumphed.

To the general confusion, critics, if they may be said to have existed at all, have added by their paltry conception of the art. They have deemed it a sufficient denunciation of a poet to accuse him of imitating his masters; as though the history of an art were rather a series of violent rebellions than a growth and a progressive illumination. Not all generations are privileged to see the working of a great creative impulse, but the want, keen though it be, furnishes no reason for the utter rejection of

But this fear of echoing the past may work us a yet greater misfortune. In the rejection of the manner of an earlier epoch may be implicit also the rejection of the very sources from which springs the life of the fair art. Melody, and a love of the green earth, and a yearning for God are of the very fabric of poetry, deny it who will. The Muses still reign on Parnassus, wax the heathen never so furious. Poets who love poetry better than their own fame in Grub Street will do well to remember

The flame, the noble pageant of our life;The burning seal that stamps man's high indentureTo vain attempt and most forlorn adventure;Romance and purple seas, and toppling towns,And the wind's valiance crying o'er the downs.

It is a poor business to find in such words only the illusions of youth and a new enthusiasm. The desire for novelty, the passion for force and dirt, and the hankering after freakishness of mood, which many have attempted to substitute for the older and simpler things, are themselves the best evidence of disillusion and jaded nerves. There is a weariness and a disgust in our recent impatience with beauty which indicate too clearly the exhaustion of our spiritual resources. It may well be that the rebirth of poetry is to be manifest in a reappearance of the obvious, —in a love of the sea and of the beauty of clouds, in the adventure of death and the yet more amazing adventure of living, in a vital love of colour, whether of the Orient or the drug-shop, in childlike love of melody, and the cool cleansing of rain, in strange faces and old memories....