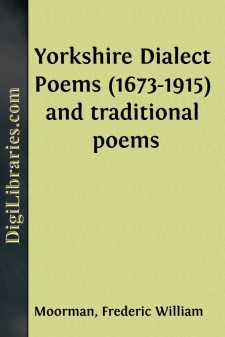 Several anthologies of poems by Yorkshiremen, or about Yorkshiremen, have passed through the press since Joseph Ritson published his Yorkshire Garland in 1786. Most of these have included a number of dialect poems, but I believe that the volume which the reader now holds in his hand is the first which is made up entirely of poems written in "broad Yorkshire." In my choice of poems I have been governed entirely by the literary quality and popular appeal of the material which lay at my disposal. This anthology has not been compiled for the philologist, but for those who have learnt to speak "broad Yorkshire" at their mother's knee, and have not wholly unlearnt it at their schoolmaster's desk. To such the variety and interest of these poems, no less than the considerable range of time over which their composition extends, will, I believe, come as a surprise.

It is in some ways a misfortune that there is no such thing as a standard Yorkshire dialect. The speech of the North and East Ridings is far removed from that of the industrial south-west. The difference consists, not so much in idiom or vocabulary, as in pronunciation—especially in the pronunciation of the long vowels and diphthongs.(1) As a consequence of this, I have found it impossible, in bringing together dialect poems from all parts of the county, to reduce their forms to what might be called Standard Yorkshire. Had I attempted to do this, I should have destroyed what was most characteristic. My purpose throughout has been to preserve the distinguishing marks of dialect possessed by the poems, but to normalise the spelling of those writers who belong to one and the same dialect area.

The spelling of "broad Yorkshire" will always be one of the problems which the dialect-writer has to face. At best he can only hope for a broadly accurate representation of his mode of speech, but he can take comfort in the thought that most of those who read his verses know by habit how the words should be pronounced far better than he can teach them by adopting strange phonetic devices. A recognition of this fact has guided me in fixing the text of this anthology, and every spelling device which seemed to me unnecessary, or clumsy, or pedantic, I have ruthlessly discarded. On the other hand, where the dialect-writer has chosen the Standard English spelling of any word, I have as a rule not thought fit to alter its form and spell it as it would be pronounced in his dialect.

I am afraid I may have given offence to those whom I should most of all like to please—the living contributors to this anthology—by tampering in this way with the text of their poems. In defence of what I have done, I must put forward the plea of consistency. If I had preserved every poet's text as I found it, I should have reduced my readers to despair.

In conclusion, I should—like to thank the contributors to this volume, and also their publishers, for the permission to reproduce copyright work. Special thanks are due to Mr. Richard Blakeborough, who has placed Yorkshiremen under a debt, by the great service which he has rendered in recovering much of the traditional poetry of Yorkshire and in giving it the permanence of the printed page....