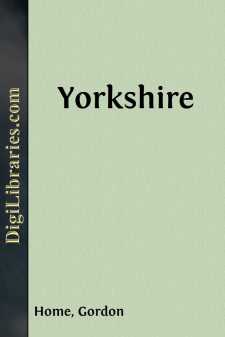 CHAPTER I ACROSS THE MOORS FROM PICKERING TO WHITBY

The ancient stone-built town of Pickering is to a great extent the gateway to the moors of North-eastern Yorkshire, for it stands at the foot of that formerly inaccessible gorge known as Newton Dale, and is the meeting-place of the four great roads running north, south, east, and west, as well as of railways going in the same directions. And this view of the little town is by no means original, for the strategic importance of the position was recognised at least as long ago as the days of the early Edwards, when the castle was built to command the approach to Newton Dale and to be a menace to the whole of the Vale of Pickering.

The old-time traveller from York to Whitby saw practically nothing of Newton Dale, for the great coach-road bore him towards the east, and then, on climbing the steep hill up to Lockton Low Moor, he went almost due north as far as Sleights. But to-day everyone passes right through the gloomy cañon, for the railway now follows the windings of Pickering Beck, and nursemaids and children on their way to the seaside may gaze at the frowning cliffs which seventy years ago were only known to travellers and a few shepherds. But although this great change has been brought about by railway enterprise, the gorge is still uninhabited, and has lost little of its grandeur; for when the puny train, with its accompanying white cloud, has disappeared round one of the great bluffs, there is nothing left but the two pairs of shining rails, laid for long distances almost on the floor of the ravine. But though there are steep gradients to be climbed, and the engine labours heavily, there is scarcely sufficient time to get any idea of the astonishing scenery from the windows of the train, and you can see nothing of the huge expanses of moorland stretching away from the precipices on either side. So that we, who would learn something of this region, must make the journey on foot; for a bicycle would be an encumbrance when crossing the heather, and there are many places where a horse would be a source of danger. The sides of the valley are closely wooded for the first seven or eight miles north of Pickering, but the surrounding country gradually loses its cultivation, at first gorse and bracken, and then heather, taking the place of the green pastures.

At the village of Newton, perched on high ground far above the dale, we come to the limit of civilization. The sun is nearly setting. The cottages are scattered along the wide roadway and the strip of grass, broken by two large ponds, which just now reflect the pale evening sky. Straight in front, across the green, some ancient barns are thrown up against the golden sunset, and the long perspective of white road, the geese, and some whitewashed gables, stand out from the deepening tones of the grass and trees. A footpath by the inn leads through some dewy meadows to the woods, above Levisham Station in the valley below. At first there are glimpses of the lofty moors on the opposite side of the dale where the sides of the bluffs are still glowing in the sunset light; but soon the pathway plunges steeply into a close wood, where the foxes are barking, and where the intense darkness is only emphasized by the momentary illumination given by lightning, which now and then flickers in the direction of Lockton Moor....