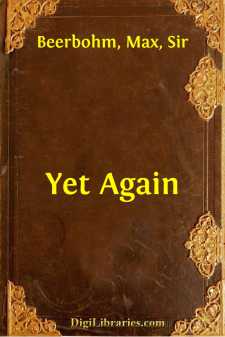 If I were 'seeing over' a house, and found in every room an iron cage let into the wall, and were told by the caretaker that these cages were for me to keep lions in, I think I should open my eyes rather wide. Yet nothing seems to me more natural than a fire in the grate.

Doubtless, when I began to walk, one of my first excursions was to the fender, that I might gaze more nearly at the live thing roaring and raging behind it; and I dare say I dimly wondered by what blessed dispensation this creature was allowed in a domain so peaceful as my nursery. I do not think I ever needed to be warned against scaling the fender. I knew by instinct that the creature within it was dangerous—fiercer still than the cat which had once strayed into the room and scratched me for my advances. As I grew older, I ceased to wonder at the creature's presence and learned to call it 'the fire,' quite lightly. There are so many queer things in the world that we have no time to go on wondering at the queerness of the things we see habitually. It is not that these things are in themselves less queer than they at first seemed to us. It is that our vision of them has been dimmed. We are lucky when by some chance we see again, for a fleeting moment, this thing or that as we saw it when it first came within our ken. We are in the habit of saying that 'first impressions are best,' and that we must approach every question 'with an open mind'; but we shirk the logical conclusion that we were wiser in our infancy than we are now. 'Make yourself even as a little child' we often say, but recommending the process on moral rather than on intellectual grounds, and inwardly preening ourselves all the while on having 'put away childish things,' as though clarity of vision were not one of them.

I look around the room I am writing in—a pleasant room, and my own, yet how irresponsive, how smug and lifeless! The pattern of the wallpaper blamelessly repeats itself from wainscote to cornice; and the pictures are immobile and changeless within their glazed frames—faint, flat mimicries of life. The chairs and tables are just as their carpenter fashioned them, and stand with stiff obedience just where they have been posted. On one side of the room, encased in coverings of cloth and leather, are myriads of words, which to some people, but not to me, are a fair substitute for human company. All around me, in fact, are the products of modern civilisation. But in the whole room there are but three things living: myself, my dog, and the fire in my grate. And of these lives the third is very much the most intensely vivid. My dog is descended, doubtless, from prehistoric wolves; but you could hardly decipher his pedigree on his mild, domesticated face. My dog is as tame as his master (in whose veins flows the blood of the old cavemen). But time has not tamed fire. Fire is as wild a thing as when Prometheus snatched it from the empyrean. Fire in my grate is as fierce and terrible a thing as when it was lit by my ancestors, night after night, at the mouths of their caves, to scare away the ancestors of my dog....